Change is a two-way street. As America begins to cope with the jarring changes coming in the near future, it will be useful and wise for our leaders to remember the lessons of the last eight years, and to consider the ways President Obama’s administration has changed our nation and the world for the better.

There are kids entering junior high school who have no real memory of anyone else in the White House. The only American president they’ve known has been a man unwavering in his dedication to fairness, compassion and steady progress. They will remember this president as a man who promised in his hopeful farewell that “the long sweep of America has been defined by forward motion, a constant widening of our founding creed to embrace all, and not just some.”

And they will also remember him as a man who got a lot done in eight years, even when facing an entrenched, intransigent opposition. President Obama took office when the worst financial crisis since the Great Depression threatened the foundations of the world economy. Our own economy was hemorrhaging jobs. Families were losing their homes and savings. The unemployment rate peaked near a terrifying ten percent.

But this president managed not only to rescue the economy, but to begin to restore the virtuous economic cycle that created the American middle class and made us the envy of the world.

This month, the final jobs report under the Obama Administration showed the unemployment rate at 4.7 percent—less than half its 2010 peak and a rate that a great many economists consider “full employment.” U.S. businesses have added more than 15.8 million new jobs since early 2010. In one of this administration’s most dramatic success stories, President Obama directly intervened to rescue the American auto industry, saving an iconic part of the American economy along with 1.5 million jobs.

And jobs aren’t just more plentiful, they’re better: Wages are growing faster than at any point in the last seven years. Median household income has risen significantly. And though that income is not fairly distributed among all the hard-working men and women who drive our economy, President Obama made some progress there, too. The very first bill he signed was the Lilly Ledbetter Fair Pay Act, helping victims of pay discrimination. No wonder then that consumer confidence has returned under President Obama.

In March of 2009, the Dow Jones had lost more than half of its value. Since then, the Dow has tripled. These enormous gains in the stock market and the creation of trillions in wealth took place even as the worst tendencies of Wall Street were reined in by the Dodd-Frank Wall Street Reform and Consumer Protection Act, which included vital consumer protections against unscrupulous lenders and abusive practices. And the Student Aid Bill of Rights has helped those struggling to pay off student debt.

Because our economy got going and growing again, our families, our businesses and our government took in more money, dramatically reducing our deficit. In 2009, the deficit reached a high of $1.4 trillion. In 2016, it was $587 billion.

And though we don’t talk about it as just an economic reform, 20 million more Americans can now get the health care they need instead of getting sicker than they should, being forced out of the workplace to provide care for family members or becoming economically crippled by medical bills, all because of the Affordable Care Act. As many as 129 million Americans with pre-existing conditions can no longer be denied coverage, which means they are free to take new and better jobs without losing critical coverage. These huge numbers represent real human stories—individuals who are struggling with cancer, Alzheimer’s and heart disease, but who no longer have to struggle alone against predatory insurance companies.

Too many Americans still have not recovered what they lost in the downturn. Too many hardworking families still feel the pain of the Great Recession. And too many face insecurity as our economy is transformed by automation and globalization. But given the historic, unprecedented and daunting disaster that President Obama inherited, our astonishing recovery is undeniable.

Soon, a new administration will take the reins of power and steer our nation in a new direction. As the president said in his farewell address, “we can argue about how to best achieve [our] goals. But we can’t be complacent about the goals themselves. For if we don’t create opportunity for all people, the disaffection and division that has stalled our progress will only sharpen in years to come.” I pray that the incoming administration, as well as the American people, take that lesson to heart.

I will always be proud of President Barack Obama. I am grateful for his service and leadership. And I am certain that the positive, progressive change he fought for will stand as a testament to the resilient possibilities of this great nation. 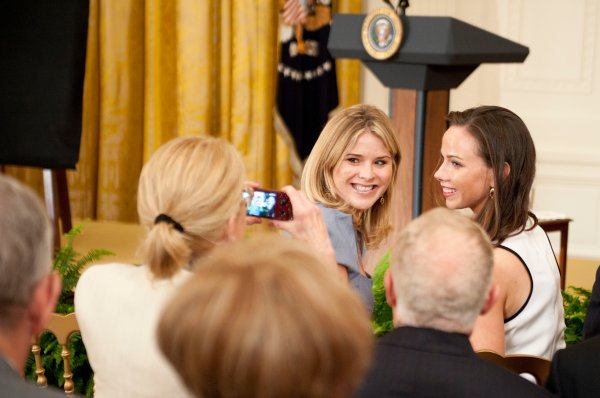 Exclusive: The Bush Sisters Wrote the Obama Girls a Letter
Next Up: Editor's Pick