Work is still being performed on the stage ahead of next week inauguration at the U.S. Capitol, on Jan.13, 2017 in Washington, DC.
Mark Wilson—Getty Images
By Elizabeth Dias

When Donald Trump takes the oath of office, Rev. Sam Rodriguez Jr. will stand on the inaugural platform and proclaim Jesus’ famous words from the Sermon on the Mount: “Blessed are the poor in spirit, for theirs is the kingdom of heaven.” Alongside him will be Cardinal Timothy Dolan of New York, who plans to read aloud from Solomon’s prayer to God for wisdom when he became king of Israel: “Even one who is perfect among human beings will be regarded as nothing without the wisdom that comes from you,” the passage reads.

The words are pointed, and more so because of who says them. Both Rodriguez and Dolan were critical of Trump during his campaign, and for an incoming president who is famous for targeting his opponents, their participation stands out. Trump has selected an unusually large mix of both friends and critics to bless his new Administration, some famed, others fringe.

Rodriguez and Dolan will be joined by four others who will also read Scripture and pray. Trump’s longtime spiritual advisor Paula White, leader of the pentecostal New Destiny Christian Center in Orlando, will pray to invoke God’s blessing on America and the new Administration. White will be the first woman pastor to ever pray in an inaugural ceremony, according to the Presidential Inaugural Committee.

Two-time Academy Award winner Rabbi Marvin Heir, founder of the Simon Wiesenthal Center and its Museum of Tolerance, will be the first rabbi to participate since Ronald Reagan. Franklin Graham, of Samaritan’s Purse and the Billy Graham Evangelistic Association, and Wayne T. Jackson, bishop of Great Faith Ministries International in Michigan, will also participate. Dolan will be the first archbishop to pray since Jimmy Carter.

Three of the six openly challenged Trump during the campaign. Dolan criticized Trump’s immigration politics in an op-ed for the New York Daily News soon after Trump announced his presidential run: “Nativism is alive, well—and apparently popular!” he wrote. Rodriguez, who leads the National Hispanic Christian Leadership Conference, repeatedly criticized Trump’s commitments in the campaign to build a southern wall and deport with force the roughly 10 million undocumented immigrants currently living in the United States. Hier spoke out against Trump’s suggestion of a Muslim registry: “Mr. Trump, by lumping all Muslims in the crosshairs of the Terrorism crisis only hurts the legitimate campaign against Islamist Fundamentalism and demeans law abiding American citizens,” he said at the time.

The other three have stood faithfully by the president-elect. White—who is fasting during the day for three weeks before the inaugural—prayed privately with Trump through the campaign, as she has throughout their fifteen-year friendship. Since the election, White says she has been in almost daily contact with Trump’s team, including meeting with incoming White House chief of staff Reince Priebus and transition team officials to identify global positions where the church’s voice is especially needed. Graham rallied evangelicals to the polls via a bus tour in every state, and after Trump won, suggested that God, not Russia, was more likely to have interfered in the election results, and that God may have allowed Trump to win to protect America. Jackson gave Trump time on his Christian television network via an interview to reach African American voters through his televangelism networks.

The group reflects the coalition Trump has brought together, political mainstreamers like Dolan and Rodriguez, and historical outsiders like White and Jackson. “He recognizes I think as we all do how much our nation needs healing and reconciliation, restoration,” White says of Trump’s picks. “On the very day he steps into office, it is not symbolism, it is substance of unity.”

Not everyone agrees. White, who helped advise on the selection of inaugural prayer participants, says she was not aware of anyone suggesting an imam to participate. An imam has never prayed in the actual swearing-in—nearly all speakers since George H.W. Bush have been Protestant, but inaugurals from Dwight Eisenhower through Richard Nixon all included a set of prayers from Catholic, Protestant, Greek Orthodox, and Jewish leaders.

Following presidential tradition, the morning after the inauguration Trump will join an interfaith prayer service at the Washington National Cathedral, where historically a much broader collection of non-Judeo-Christian religious voices is included. If Trump’s theological mix is new for anything, it is that it raises the political profile of pentecostal Christianity. White and Jackson both preach a version of what some criticize as a gospel of prosperity, the belief that God wants followers to thrive in wealth and health, and Trump’s will be the first inauguration to forefront that theological tradition.

Participation is not only a spiritual statement, but also a reminder of participants’ political priorities. Rodriguez wants Trump to sign a piece of legislation in his first 100 days that will secure the border, stop illegal immigration, and find a pathway to legalize the vast majority of immigrants and protect immigrant children. Dolan and Graham are outspoken religious freedom advocates and abortion opponents. Heir hopes the administration will protect America’s alliance with Israel.

Critics say standing with Trump in prayer of any sort blesses the new president’s policies. Hier faces calls to drop out to uphold the vision of his Museum of Tolerance. Rodriguez and Dolan both recognize that their decision to participate may not please all in their communities, and White has been accused, falsely, of not believing in the Trinity. In Obama’s inaugurals, backlash was the other way around—Obama twice faced criticism for appearing to sanction his evangelical invitees’ opposition to gay marriage, both for pastors Rick Warren in 2009 and Louie Giglio in 2013.

Dolan, who prayed at both the 2012 Republican and Democratic National Conventions, draws a distinction about the role. “That is my job, that is my sacred responsibility, to pray with and for people,” he argues. “There’s a great American tradition that we give a new president a chance, that we do our best to be open to his ideas, and that we just want to make this work.” 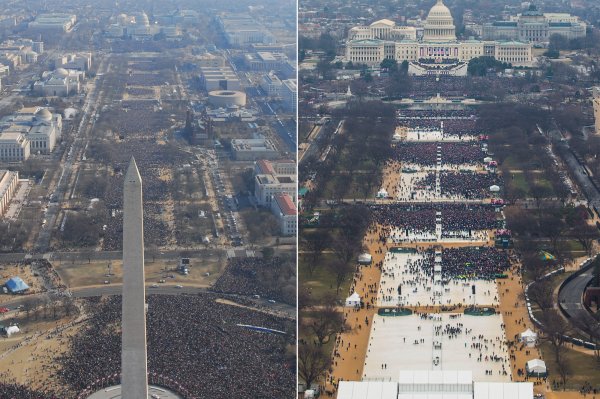