Katy Perry Helped Fund This PSA Against a Muslim Registry

Katy Perry was a strong Hillary Clinton supporter, and now she’s made it clear that her political action will outlast the 2016 election. Perry executive-produced a new PSA called “#DontNormalizeHate,” which spotlights the Japanese internment camps in light of Trump’s anti-Muslim discourse.

The short PSA, which Perry helped fund, tells the narrative of Haru Kuromiya, an 89 year-old who was subject to this mass incarceration. “My entire family was put on a registry. We were given name tags and numbers, and then we had to wear them, ” she tells the camera. “We had to leave our businesses, our homes and our possessions behind, even our pets. We were an American farm family now living in an internment camp, and our Constitutional rights were taken away from us.”

As an ominous warning, the elderly woman also outlines that the historical event started small: “It all started with fear and rumors, then it ballooned into the registration of Japanese Americans.”

The PSA suggests history could repeat itself, in light of Trump’s comments about a Muslim registry, and ends with the statement, “Don’t turn against each other out of fear.”

The short film’s director, Aya Tanimura, told the Los Angeles Times that she commends Perry’s involvement in the project. “I think like a lot of us who are terrified of Trump’s ideals and policies, she is too. And this is one instance where she’s able to help educate someone — even one person — on the horrors of the past and what could potentially be repeated.”

CORRECTION: An earlier version of this article misstated the gender of the PSA’s director, Aya Tanimura. Tanimura is a woman. 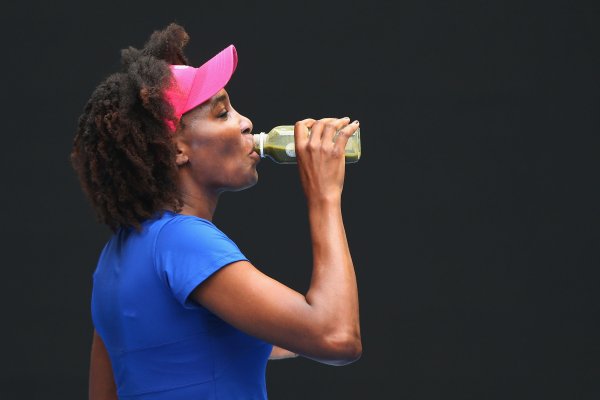 Venus Williams Opens Up About Going Vegan to Fight Her Autoimmune Disease
Next Up: Editor's Pick