Donald Trump once again blamed the intelligence community the recent leak of unsubstantiated reports about his activities in Russia, writing in a series of Twitter posts on Friday morning that “there is no proof, and never will be.”

“It now turns out that the phony allegations against me were put together by my political opponents and a failed spy afraid of being sued,” Trump began his tweetstorm, likely referencing reports that the super PAC behind his primary opponent Jeb Bush paid for the opposition research. (Bush’s team has denied this.)

Trump continued in two subsequent tweets, one of which relied on Russia’s word over the briefing he reportedly received from top American intelligence officials: “Totally made up facts by sleazebag political operatives, both Democrats and Republicans – FAKE NEWS! Russia says nothing exists. Probably…released by “Intelligence” even knowing there is no proof, and never will be. My people will have a full report on hacking within 90 days!”

In this week’s magazine: Russia, a Dossier of Rumors and a President-Elect

CNN reported earlier this week that Trump had been briefed on an unverified dossier claiming that Russia had compromising information about him. The following day, Trump held his first news conference since the election, during which he dismissed the information as “fake news” and “phony stuff,” and began blaming the intelligence community for leaking the documents. “That was released by maybe the intelligence agencies, who knows, but maybe the intelligence agencies, which would be a tremendous blot on their record if they in fact did that,” Trump said at the press conference Wednesday. 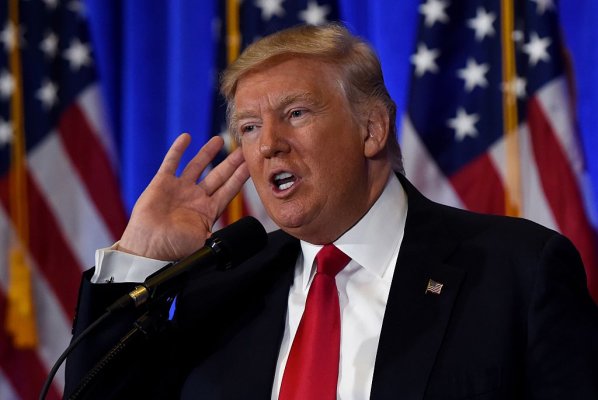 Donald Trump Says It’s Just Fine That His Nominees Are Disagreeing With Him
Next Up: Editor's Pick