President-elect Donald Trump took to Twitter this week to express his support for L.L.Bean, the clothing outfitter facing boycott threats over a Bean family member’s donations in support of Trump’s campaign. While few stores would object to an endorsement from a soon-to-be president, Trump’s call to “Buy L.L.Bean” may not fall on the right ears. Of the store’s 49 retail stores and outlets, 39 are in counties that recorded more votes from Hillary Clinton.

As the following map shows, L.L.Bean stores are heavily concentrated in New England, a Democratic stronghold. Each dot in the map is colored according to whether the county where the store is located preferred Clinton or Trump on Nov. 8.

Of course, there’s no law that one can only purchase down jackets and flannel shirts in the county where he or she voted, and since many of the retailer’s patrons shop online, it’s not possible to say whether this means a majority of the customers are Democrats. But to borrow from a popular pre-election meme: If only L.L.Bean stores could vote, Hillary Clinton would be the next president.

In fact, this is true of the large majority of clothing retailers that TIME examined, using location data from AggData and matching the stores’ counties with election results from the Atlas of U.S. Presidential Elections. On the face of it, this may seem odd, since Clinton won fewer than 500 of the 3,112 counties for which there is reliable data. But since Clinton won overwhelmingly urban, high-population areas, while Trump ran the table on smaller, more rural districts, it makes sense that retailers would tend to cluster around Democratic areas. (TIME only considered exclusive retail stores for each brand, not locations like Walmart that often stock popular brands together.) Still, the distribution is not even across every store. American Apparel, for example, has only one location in a Republican-leaning county:

The teen discount giant rue21, meanwhile, was one of the few stores with a majority of its locations in Republican counties:

As far as L.L.Bean’s competition goes, Land’s End had almost exactly the same political breakdown, even though it has locations in more parts of the country:

For higher-end, national retailers go, most stores fell somewhere around 70% on the Democratic scale, as seen with labels like J. Crew, Brooks Brothers and Banana Republic.

The same, finally, was true of a certain name-brand hawker of women’s undergarments, which trended only mildly in favor of those who supported the would-be first female president. 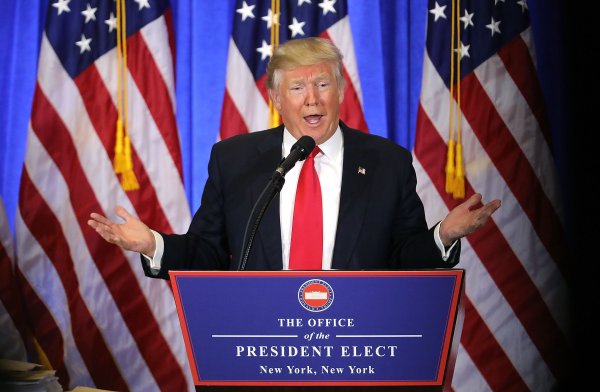