Biden turned his back to cameras and those in the crowd to wipe away tears moments after Obama announced he was bestowing the vice president with the Presidential Medal of Freedom.

“I had no inkling,” Biden said after the emotional moment.

Obama was paying tribute to Biden, who he called “my brother” and “a lion of American history,” when he suddenly invited a military aide to join them with the medal.

Biden first shook his head in disbelief and then kept his eyes facing skyward while taking deep breaths as Obama prepared to tie the medal around Biden’s neck. The two then hugged.

“This honor is not only well beyond what I deserve , but it’s a reflection of the extent and generosity of your spirit. I don’t deserve this, but I know it came from the President’s heart,” Biden said.

At the start of the news conference, Obama made a reference to the many memes circulated the internet about the pair’s friendship. “This also gives the internet one last chance to talk about our bromance,” Obama said. 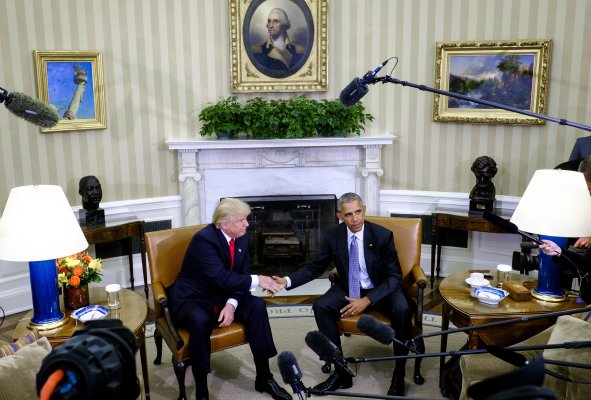 The Obamas’ White House Decorator Offered to Advise the Trumps
Next Up: Editor's Pick