Donald Trump’s Cabinet picks have been unafraid to contradict their future boss.

In confirmation hearings this week, five of the President-elect’s nominees have distanced themselves from some of his remarks on such hot-button topics as foreign policy, immigration and the military.

Some of that is to be expected. After all, Trump has shown himself to be ideologically flexible, and he’s apt to contradict some of his own prior positions.

And in some cases, the nominees may need to take a different tack to ensure they can overcome potential objections from key lawmakers, since it would only take a handful of Republican defections to spike a nomination.

Trump himself praised their independence Friday, tweeting, “All of my Cabinet nominee are looking good and doing a great job. I want them to be themselves and express their own thoughts, not mine!”

What Trump has said: Trump has repeatedly called for friendlier relations with Russia and Vladimir Putin, even in the face of evidence of Russian hacks on the United States. For months he publicly cast doubt about the intelligence community’s conclusion that Russia was behind the election-related hacks in 2016, only acknowledging for the first time Wednesday that Russia was to blame.

Mattis: Russia continues to be “an adversary in key areas,” Trump’s pick for Secretary of Defense told the Armed Services Committee. “Since Yalta, we have a long list of times that we’ve tried to engage positively with Russia,” Mattis said. “We have a relatively short list of successes in that regard.”

Pompeo: In his CIA director hearings before the Intelligence Committee, Pompeo said he accepts the report that found Russia responsible for the hacks: “It is pretty clear what happened here,” he said. He also said it was “clear” that the hacking was designed to affect American democracy and that Russia is in “violation of law of war” for targeting civilians in Syria.

What Trump has said: Trump has been skeptical of NATO, repeatedly calling it “obsolete” or suggesting he would renegotiate the terms of the alliance. He also suggested he would only defend NATO allies “if they fulfill their obligations” to the U.S. He has argued forcefully against the Trans-Pacific Partnership, saying he’ll pull the U.S. out of the trade deal on his first day in office.

Tillerson: “I do not oppose TPP,” Tillerson said in his hearings for Secretary of State before the Foreign Relations Committee. He also said Article 5 of NATO, which says an attack on one member country is an attack against all, is “inviolable” and the U.S. will defend NATO allies.

Mattis: Mattis affirmed support for NATO, calling it “the most successful military alliance, probably, in modern world history, maybe ever.”

What Trump has said: Trump has said he would back out of the Iran nuclear deal, saying, “My number-one priority is to dismantle the disastrous deal with Iran.” Trump has suggested that it might be beneficial for the U.S. if Japan and South Korea develop nuclear weapons.

Tillerson: Tillerson broke with Trump on the idea that Japan or South Korea should have nuclear weapons. “I do not agree,” he said. “One of the vital roles for the State Department to play … has to be the pursuit of nuclear nonproliferation.”

Mattis: Mattis said he would honor the “imperfect arms control agreement” with Iran. “When America gives its word we have to live up to it and work with our allies,” he said.

What Trump has said: In December 2015, Trump proposed temporarily blocking all Muslim immigration to the U.S. He has also spoken in favor of putting surveillance on mosques and making American Muslims register in a database.

Tillerson: “I think what’s important [is] that we are able to make a judgment about the people that are coming into the country and so I do not support a blanket-type rejection of any particular group of people,” Tillerson said of the proposed Muslim immigration ban.

Sessions: In his hearings for Attorney General before the Judiciary Committee, the Alabama senator said, “I do not support the idea that Muslims as a religious group should be denied entry to the United States.” He also said, “I would not favor a registry of Muslims in the United States, no I would not. … And I think we should avoid surveillance of religious institutions unless there’s a basis to believe that dangerous or threatening illegal activity is going on there.”

Kelly: Kelly said establishing a Muslim database or putting mosques under surveillance could be unconstitutional. He also said he was against banning Muslim immigration to the United States. “I don’t think it is ever appropriate to focus on something like religion as the only factor,” he said.

Sessions: “Congress has taken an action now that makes it absolutely improper and illegal to use waterboarding or any other form of torture in the United States,” Sessions said.

Pompeo: Pompeo said he would not obey orders if Trump asked him to torture. “I can’t imagine that I would be asked that by the President-elect,” he said.

Kelly: Kelly said he disagrees with Trump’s plan to expand acceptable torture methods. “I don’t think we should ever come close to crossing a line we Americans expect to follow in terms of interrogation techniques,” he said.

What Trump has said: Trump’s central campaign promise is to build a wall along the border with Mexico to help curb illegal immigration. He launched his candidacy in June 2015 saying of undocumented Mexican immigrants, “They’re bringing drugs. They’re bringing crime. They’re rapists.”

Tillerson: “I would never characterize an entire population with any single term at all,” Tillerson said when asked if he would characterize Mexicans as “rapists” or “criminals.” “Mexico is a long standing neighbor and friend of this country.”

Kelly: “A physical barrier in and of itself will not do the job,” Kelly said of Trump’s wall. “It has to be layered defense. If you build a wall from the Pacific to the Gulf of Mexico, you still have to back that up with human beings, sensors.” 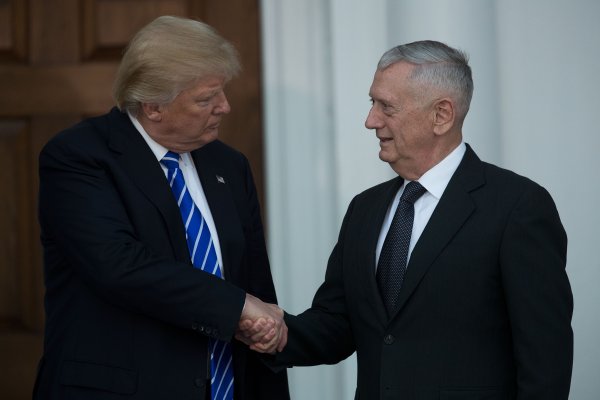