Country megastar Dierks Bentley returned last May with his eighth album Black, the most fully-formed LP of his career and one of EW’s Top Country Albums of 2016. It gave him his highest first week of sales ever and its first two singles —the hip-hop-infused “Somewhere On A Beach” and the Elle King-featuring “Different For Girls” — have gone to No. 1 on the country airplay charts.

This month he launched the title track as the set’s third single and now Entertainment Weekly and TIME are thrilled to premiere its accompanying music video below.

Shot outside of Reykjavík, Iceland by Wes Edwards — who has directed many of Bentley’s videos (“5-1-5-0,” “Tip It On Back,” “Riser,” and more) — the clip is the frequent collaborators’ biggest undertaking yet. With a grand, metaphorical conceit guiding them, the crew flew to the Western European island in November for four days of round-the-clock shooting. “We’re both not happy unless we’re just barely clearing the highest possible bar that we can jump,” Edwards explains. “The night before the shoot we were having dinner at the hotel in Iceland and Dierks was like, ‘It’s gotta be the best one ever. No pressure,'” he recalls. “It was my idea to come here so if this goes south, I’m totally screwed!'”

Bentley frames his drive more concretely: “These days, I won’t do anything unless I think it’s really beneficial, not with kids and my wife back at home.” But it wasn’t just the remote location or the terrible weather — “We had a once-a-year storm when we were there,” says Edwards, describing how the entire shoot took place amid below-freezing temps and gusting winds — that made this their loftiest attempt yet. “The most ambitious part of the whole deal was convincing my wife to be in the video,” says Bentley. “The fact that she was in the video, that’s a story in-and-of itself.”

Bentley and his wife Cassidy have been married for more than a decade and Black is a concept record based on the experiences and perspective of that relationship. (That her maiden name is Black brings a welcome immediacy to the set.) So while her inclusion might seem natural, it was initially hampered by the fact that Cassidy is extremely camera shy. The two men, then, began casting for a lead actress. As Edwards remembers, he visited Bentley on a Kentucky tour date last year when the star couldn’t settle on a female lead. There, “[Dierks] was finally like, ‘Man, why don’t we get Cass to do it?’” the director says. “I was like, ‘If you can!’”

Cassidy says the request arrived shortly thereafter. “I was in the kitchen,” she recalls, “when [Bentley] sent me this text: ‘I need you to be in this video. It doesn’t make sense to me if you’re not in it.'” She remained hesitant. “You know the ‘…’ bubble on text messages?” she asks. “It was like ‘…’ forever as I just sat there. He was like, ‘I see the ‘…’!” Ultimately, she agreed. “We’ve been married for 11 years and have three kids. It’s really nice that he wants me to be in it. It’s lovely.”

Throughout the scenic clip, Bentley is in constant pursuit of his wife. And while he says that’s normal these days — “I follow a lot of women around,” he remarks, “one of them is eight, another is six. I follow them around and pick up their crap all day long!” — Cassidy says she was struck by the plot’s more symbolic meaning. “When I think about intimacy, you do go through these landscapes together that are totally foreign that you’ve never been in,” she says. “You have to take turns leading and following each other to stay together.”

The music video for “Black” is streaming exclusively on EW and TIME below. Bentley’s What The Hell tour launches January 19 in Dayton, Ohio. All dates are available on the singer’s website. 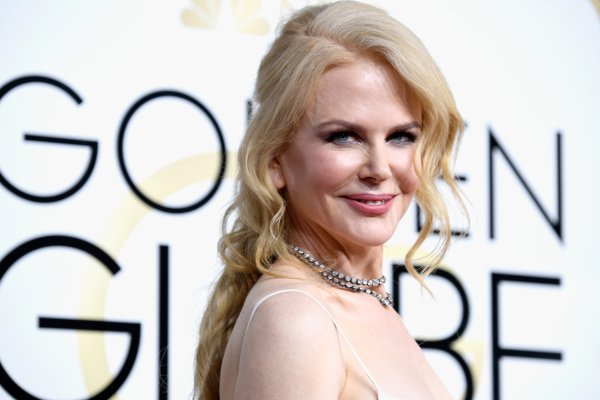