The Stock Market on 'Roids: Everything You Need to Know About High-Frequency Trading

In March 2009, the internet cable company Spread Networks secretly constructed a high-speed fiber-optic cable from Chicago to New Jersey, dotting an 825-mile swathe of farmland and cities with orange warning signs staked over a one-inch wide, super connection. With messages bouncing through the cables at two-thirds the speed of light, it allowed traders on the Chicago futures market to connect with New York exchanges at high speeds, shaving 3 milliseconds of the usual trading times.

The investors who capitalize on those kinds of messages are known as high-speed traders. They have been driving an long-term trend that has moved stock trading from raucous trading floors of the major exchanges to bundles of computers throughout the country, many concentrated in northern New Jersey.

The trend is not new, but it made the news this week when the FBI said that it has been investigating whether high-speed traders are engaging in insider trading. And author Michael Lewis made a splash with his new book Flash Boys, claiming Sunday on 60 Minutes, “The United States stock market, the most iconic market in global capitalism, is rigged.”

So how does high-frequency trading work?

High-speed traders buy and sell stock via computers that use to algorithms to crunch data ranging from interest rates and stock price differentials to news headlines. Many of the computers are located in hubs as close as possible to stock exchanges in order to receive data and trade stock nearly instantaneously. Computerized trading is estimated to account for half the shares traded in the United States.

The rise of high-speed trading has put trading volumes on adrenaline. In 2000, the average daily volume of shares traded on the S&P 500 was 2.85 billion. By 2010, the volume of shares traded reached 13.199 billion, according to Aite Group, a financial consulting firm. Though high-speed trading has tapered in recent years as the market has saturated and the gains have declined, the trend is growing rapidly in Europe and Asia.

Why does Lewis think the stock market is rigged?

If you buy 1,000 shares of Apple, the order is made on a series of 13 public exchanges throughout northern New Jersey that are connected by fiber-optic cables. Your order pings along the cables from exchange to exchange, buying a few shares at each stop along the way in order to seek the best possible price. As it does, it bumps into high-speed trader’s hub plugged into the exchanges that track trade data at ultra fast rates.

When high-speed traders’ computers recognize that Apple shares have been ordered, they flash ahead of your order, racing it to the next exchange through specially constructed fiber-optic lines, buy the Apple share first, and sell it back to you at marginally higher price. Over and over again, millions of each time each day, high-speed traders beat your trade by a matter of milliseconds, netting huge profits, and costing you a few pennies per share you trade.

“There’s no enforcement of the speed limits,” says David Weiss, a senior analyst at Aite Group. “If you have a national best bid offer and you pay for a direct feed (to a stock exchange), you’re a little more efficient you get there a split second faster than everybody else. There’s an advantage in seeing it (first)… It’s trading on steroids. You have that advantage in terms of actual physics.”

Many high-speed traders end up making money off of small discrepancies in short-term market gyrations. The advantage they have is being able to effectively place stock orders and canceling them immediately if they don’t see a gain, Weiss says.

What is the government investigating exactly?

The FBI is investigating whether high-speed trading firms are engaging in insider trading by selling or buying stocks based on information that other market participants cannot yet see. “There are many people in government who are very focused on this and who are concerned about it and who think it breaks the law,” an FBI spokesman told the Wall Street Journal. “There is a big concern that high-frequency traders are getting material nonpublic information ahead of others and trading on it.”

The SEC has announced its own probe, and Eric Schniederman, New York state’s attorney general Eric Schneiderman said on Monday high-speed trading “may be illegal.” Meanwhile, proponents say there’s nothing illegal to simply trading stocks very quickly, and anticipating the market is not the same as cheating. Manoj Narang, the chief executive of the high-frequency trading firm Tradeworx told the New York Times, “There’s no unfair advantage to using your brain, last time I checked, in a capitalist society.” 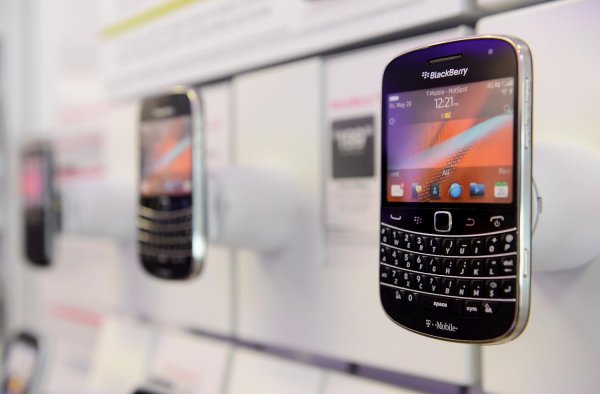 BlackBerry Sends a Breakup Letter of Its Own to T-Mobile
Next Up: Editor's Pick