President-elect Donald Trump’s plan to separate himself from his global real-estate empire falls short of the standards recommended by bipartisan ethics watchdogs and could place him in violation of the U.S. Constitution on his first day in office, according to some legal scholars.

Trump on Wednesday announced that would turn over operational control of the Trump Organization to his two eldest sons, abstain from new deals with foreign partners, refrain from discussing company matters and appoint an independent ethics adviser who will scrutinize new investment opportunities to prevent conflicts of interest. Sherri Dillon, one of the President-elect’s lawyers, said that Trump was voluntarily relinquishing managerial control of the company he built because he “wants there to be no doubt in the minds of the American public that he is completely isolating himself from his business interests.”

But the approach that Trump has chosen does not go far enough, according to legal scholars and good-government groups who bristled at the plan. Trump even backtracked on an apparent promise that the company would pursue “no new deals” while he was in office. Before the long-awaited announcement, experts urged Trump to take two specific steps to mitigate the appearance or existence of conflicts of interest: divest himself of a sprawling business empire with outposts scattered across the world, and create a blind trust managed by an independent trustee—standards adhered to by Presidents for decades.

“If he doesn’t divest, he’s going to be violating the Constitution,” Norman Eisen, a former U.S. ambassador to the Czech Republic who served as a White House ethics adviser under Barack Obama, told TIME.

Read More: Read a Transcript of Trump’s Press Conference on Conflicts of Interest

But Trump, shattering decades of bipartisan precedent, has resisted this interpretation. Instead, he notes that as President he is exempted from laws barring federal office-holders from profiting from government business, and that divestiture would create a fire sale under which he would be forced to sell his assets at a steep discount. “As you know, I have a no-conflict situation because I’m President,” Trump said Wednesday. “I don’t have to do this,” he added, pointing to sheafs of folders arrayed onstage—”some of the papers I’ve signed”—as props designed to speak for the scope of his plans.

Trump has a case. The law exempts presidents and vice presidents from the requirement from federal conflict of interest statutes. But ignoring the ethical quagmires created by his vast business empire will shadow Trump’s actions as President.

“We’ve just never had anything approach this before, in which the President of the United States is also the ultimate owner of a worldwide business enterprise,” says Fred Wertheimer, president of the government watchdog group Democracy 21. “There is such an entanglement between the President and these businesses that in my view it’s going to be completely unmanageable. He doesn’t solve this problem by saying his sons are going to manage the business.”

Appearances are just part of the problem. Scholars have argued that Trump could be in violation of the Constitution’s Emoluments Clause, which bars U.S. office-holders from taking payments or gifts from foreign governments, when foreign diplomats stay at his hotels. Dillon, Trump’s lawyer, announced Wednesday that as President he would donate proceeds from foreign government payments to his hotels to the U.S. Treasury.

Walter Shaub, the head of the nonpartisan Office of Government Ethics, said such moves were “meaningless.” At his own press conference Wednesday, Shaub noted Trump was holding himself to a lower standard than many of his appointees. ExxonMobil CEO Rex Tillerson, Trump’s pick for Secretary of State, plans to comply with government ethics rules, and Trump’s son-in-law Jared Kushner, whom Trump named a White House senior adviser Jan. 9, earned praise from ethics experts for announcing a series of steps to separate from his own real-estate empire.

The extent of Trump’s potential conflicts of interest is uncertain. The Trump Organization is a privately held company, and the President-elect has broken precedent by refusing to release his tax returns, which would have provided a fuller picture of his holdings. But according to his most recent financial disclosures, filed in the spring of 2016, Trump appears to own or control more than 500 companies in some two dozen countries, including an array of nations who are key geopolitical actors.

Trump’s decision to maintain ownership of the company while in office touched off a firestorm of criticism from watchdog groups. “The measures he plans to put in place will do nothing to solve the most serious conflict problems,” said Robert Weisman, president of Public Citizen. “Every decision he will make as president will be followed by the specter of doubt,” said Noah Bookbinder of Citizens for Responsibility and Ethics in Government. “Today was his first test as president. He failed.”

There is little critics can do to compel Trump to change course. Sen. Elizabeth Warren of Massachusetts was among a group of Democrats to introduce legislation this week that would force Trump to divest entirely from his business empire. But that bill stands little shot of sneaking through a GOP-controlled Congress. It’s unclear whether lawsuits can be brought. “The impeachment power is there,” Wertheimer notes. “No one’s going to use it early on, but who knows what kind of problems are going to arise.”

Ultimately, experts say, the best weapon to challenge Trump on ethical grounds may be the ballot box, not the legal brief. And it’s an open question whether voters will punish Trump for flouting precedent. “It would come down to optics,” says Don Fox, a former acting director of the Office of Government Ethics. “And the remedy would be the next election cycle.”

For his part, Trump said the last election proved the voters were on his side on the question of conflicts, arguing that only reporters care about his tax returns. And was the American public also concerned? 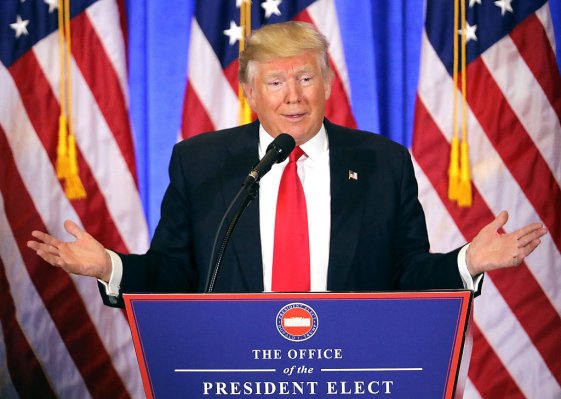