President-elect Donald Trump sharply pushed back on a report that Russian agents had gathered compromising information on him, calling it “fake news” and crap.”

Flanked by his children and senior aides and advisers at his first press conference since July, the President-elect called a document that was released publicly by BuzzFeed a fabrication drafted by political opponents. “Sick people, and they put that crap together,” Trump said.

“I read what was released and I think it’s a disgrace,” he told more than 250 reporters crammed into the atrium of Trump Tower.

Ostensibly prepared by a former British intelligence official on behalf of Trump’s primary and general election opponents, the document alleges that Russian agents have compromising material on the President-elect that would make him susceptible to blackmail. The document has circulated among reporters and inside government for months, but they have never been substantiated and suffer from several glaring errors.

Nevertheless, intelligence officials briefed Trump on a summary of the report last week during a briefing on Russian attempts to interfere in the 2016 campaign, as reported by CNN Tuesday.

At the press conference, Trump publicly blamed Russia for the election-related hacks of the Democratic National Committee and a top aide to Hillary Clinton. “I think it was Russian,” Trump said, after months of repeated and emphatic denials. Trump’s refusal to blame Russia for the hacking and damaging leaks drew criticism from even his own party on Capitol Hill, where there is broad bipartisan support for the intelligence community’s conclusions.

The Russia comments came less than an hour after Trump’s intended nominee for Secretary of State, Rex Tillerson, faced scrutiny over his ties to Russian President Vladimir Putin. Tillerson admitted that he hadn’t spoken with Trump about Russia policy and drew the ire of Republican Sen. Marco Rubio for failing to condemn the Russian leader as a war criminal or the organizer of crimes against his political foes. Tillerson also claimed he had no knowledge that his company engaged in lobbying against Russian sanctions.

Spicer called the decision by BuzzFeed to release the report as a “sad, pathetic attempt to get clicks” that was “frankly shameful and disgraceful.”

“With freedom comes responsibility and the irresponsible decision by a few news organizations to run with a false and unsubstantiated report can only be attributed to media bias,” Pence said.

Aides delivered piles of manila folders to a long table next to the lectern before the news conference began, as Trump looked to build the suspense for the event. According to Trump the documents they contain are the paperwork transferring control of his business empire to his adult sons. 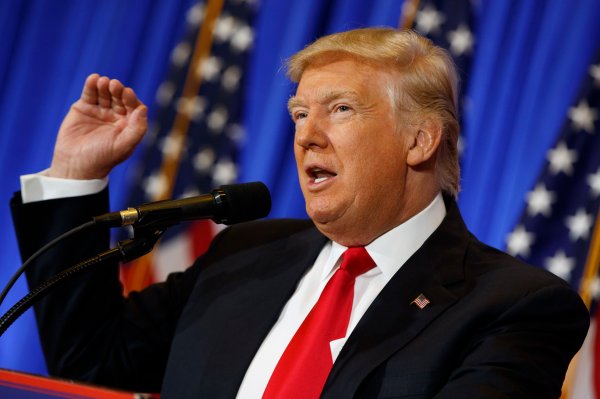