In his reflective, sometimes emotional farewell address that also called for citizen action Tuesday night in Chicago, President Barack Obama set aside a few moments to give tribute to his political partner of eight years.

The crowd around the Vice President, including his wife Dr. Jill Biden, got up to their feet in applause right at the mention of Biden’s name. In classic Joe Biden style, the VP made finger gun gestures and smiled back at Obama.

“You were the first decision I made as a nominee, and it was the best,” the President continued, “not just because you have been a great Vice President, but because in the bargain I gained a brother. And we love you and Jill like family. And your friendship has been one of the great joys of our lives.”

The rapport between the President and the VP goes both ways, judging by what Biden prepared for Obama’s 55th birthday in August.

Their heartwarming journey to becoming America’s greatest political bromance, beginning as the Democratic ticket in 2008, is well documented.

Obama and Biden hugged it out on stage after the President wrapped up his speech. Watch it above. 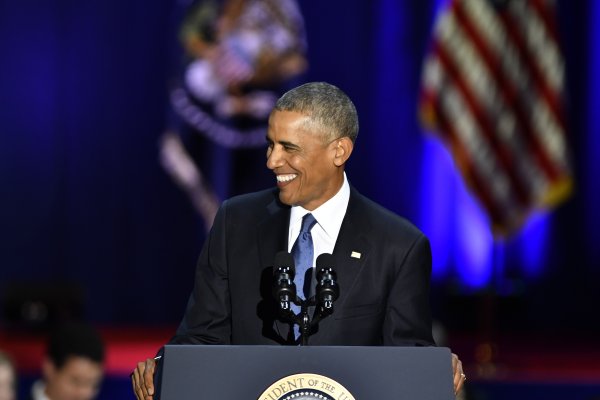 Watch the Rousing Conclusion of Obama's Farewell Speech
Next Up: Editor's Pick