The Obamas’ White House Decorator Offered to Advise the Trumps

The Obamas’ White House decorator, Michael S. Smith, said he has reached out to President-elect Donald Trump’s team, offering to help with the part of the presidential transition that will mean new artwork and furniture at 1600 Pennsylvania Avenue.

“I’ve had really nice conversations and said, ‘Listen, I think that we’re part of a very special club to have the honor to be selected to work on probably the most prominent, most famous house in the world,'” Smith told TIME. “I have very much extended my desire to be as helpful and informative and supportive as possible. We’ve had some dialogues with people from the President-elect’s team and very, very warm and great conversations.”

Smith, a member of the Committee for the Preservation of the White House since 2010, has served as the Obamas’ decorator from the first days of that presidency, working to create an interior that represented the “direction and curiosity and interests of this president and this administration.” Much of that took place in the Oval Office, where Smith said he was first struck by the height of the room.

In President Obama’s Oval Office, Smith used red curtains, which he described as “heroic”—a reminder of presidential portraits of the 18th and 19th centuries. He added models of inventions to reflect Obama’s interest in innovation, and he added striped wallpaper, a nod to the kind President Abraham Lincoln had in his Oval Office. Smith reupholstered a pair of velvet chairs from President George W. Bush’s office, opting for brown leather that was “simpler, more hardy.” He also hung two paintings by Obama’s favorite artist, Edward Hopper, borrowed from the Whitney Museum of American Art, featuring “idyllic” scenes of American farming culture.

Read: Life at 1600: A Survival Guide to the White House, from Team Obama for Team Trump

Asked what advice he has for the Trumps and their new decorators, Smith said it’s important for the White House to find a balance between history and livability.

“You have to sort of find your way. It took us some time to figure out what was going to be the fusion of the style of history with this modern, young family,” said Smith, noting that Mrs. Obama has mused at every design juncture, “How will this be for us and how will this be for the next family?”

“No one lives in this house forever. It has a limited occupancy, and you’re constantly aware of those who came before you, and you’re, you know, thoughtful and considerate of those who will go after you,” Smith said. “Even for what I do, you’re aware of yourself in a great continuum of history. The Bushes left the house in wonderful, wonderful shape. The beautiful thing is that we hopefully built upon that. But we changed it and edited it and made it for this family, and that will happen for the next family.” 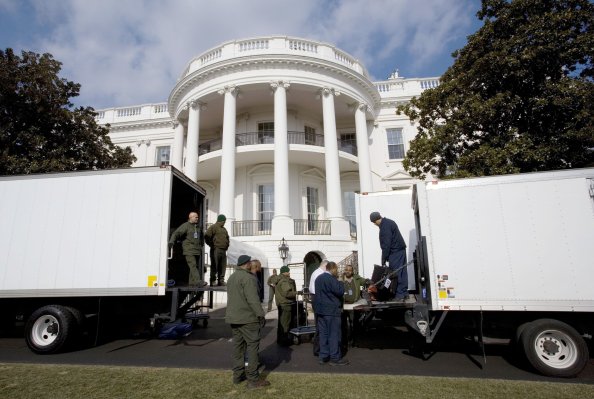 What the First Days Working at the White House Are Like
Next Up: Editor's Pick