Why Donald Trump's Choice of RFK Jr. as Vaccine Czar Is a Terrible Idea

Robert F. Kennedy Jr. arrives in the lobby of Trump Tower for a meeting with President-elect Donald Trump, in New York, on Jan. 10, 2017.
Evan Vucci—AP
Ideas
By Jeffrey Kluger
Jeffrey Kluger is Editor at Large for TIME magazine and the author of ten books, including Apollo 13, Apollo 8 and two novels for young adults. He has written more than 40 cover stories for TIME on topics ranging from space to human behavior to climate to medicine. Along with others at TIME, Kluger is an Emmy nominee for the web series A Year in Space.

There’s been a mesmerizing kind of destructive physics at play in the appointments Donald Trump has made since winning the White House. Just as a particle of matter and a particle of antimatter will destroy each other instantly on contact, so too can precisely the wrong person appointed to precisely the wrong position blow up the very purpose of the job that’s supposed to be getting done.

Department of Energy, meet former Governor Rick Perry, the man who once said he wanted to eliminate you entirely. Boom. Department of Health and Human services, meet Rep. Tom Price, who wants to throw out the Affordable Care Act, allow insurers to quit covering patients with pre-existing conditions and make Medicare less available to the people who need it most. Boom.

The through-the-looking-glass news broke today in the lobby of Trump Tower, when Kennedy descended from the presidential aerie and told the gaggle of reporters camped around the elevators that Trump had called and offered him the job and he had accepted. His new responsibilities, Kennedy said, included making sure “we have scientific integrity in the vaccine process for efficacy and safety effects.” He also stressed that “everybody ought to be able to be assured that the vaccines we have [are] as safe as they can possibly be.” Finally, he added that Trump “is very pro-vaccine, as am I.”

Later in the afternoon, a Trump spokesperson said in a statement that the president-elect “is exploring the possibility of forming a committee on Autism, which affects so many families; however no decisions have been made at this time. The president-elect looks forward to continuing the discussion about all aspects of Autism with many groups and individuals.”

Trump first weighed in on the topic of vaccines in 2014, repeating the universally debunked claim that vaccines are somehow linked to autism. He published this finding in a non-peer-reviewed Tweet, saying:

In a 2015 presidential debate, Trump doubled-down on this nonsensical non-science, even offering a personal testimonial to give it weight. “You take this little beautiful baby, and you pump — I mean, it looks like just it’s meant for a horse and not for a child,” Trump said. “We had so many instances [in which] a child had a vaccine, and came back and a week back had a tremendous fever, got very very sick, and now is autistic.”

The vaccine-autism fable, as most people know by now, began with a fraudulent study by British physician Andrew Wakefield, published in The Lancet, claiming that the measles-mumps-rubella vaccine had been provably linked to autism in children. In 2010, the journal summarily retracted the paper, finding multiple instances fraud and other unethical behavior, and concluding that Wakefield had acted with “callous disregard” for the welfare of the children in his study. He was later stripped of his license to practice medicine. So, done and done, right?

Not quite. Despite the tidal wave of studies showing that vaccines are safe and effective and that there is far greater risk—both to individual children and to the community as a whole—in leaving kids unvaccinated, the rumor has persisted. That’s partly thanks to the boldface names in Hollywood—Jenny McCarthy, Jim Carrey and Rob Schneider, we’re looking at you—who have continued to peddle the rubbish, and partly due to ostensibly more serious thinkers who have echoed them. That’s where Kennedy has played his dangerous role.

First: for all practical purposes, the thimerosal just isn’t there. It has long since been removed from all vaccines except some formulations of the flu vaccine where it’s used in vanishingly small trace doses. What’s more, thimerosal is an ethylmercury product; the type of mercury that is harmful—and only in higher concentrations—is methylmercury. Finally, while it’s true that autism cases have gone up in the the U.S. in recent years, that has happened at the precise time thimerosal levels in vaccines have fallen. Epidemiologists attribute the increased autism incidence almost entirely to better diagnoses and an expanded definition of conditions that fall onto the autism spectrum.

Kennedy has remained stubbornly unmoved by all that, continuing to scare the daylights out of parents by warning that vaccines, which have saved tens of millions of lives over the decades, are somehow a menace. Well, now he’s got a president’s ear and a president’s support, and a much bigger megaphone than he ever had before.

If there is anything Kennedy said in his impromptu press conference today that was inarguably true, it came when he commented on Trump’s beliefs about vaccines. “His opinion doesn’t matter but the science does matter, and we ought to be reading the science,” he said.

Yes, we should—because it proves that the newly chosen vaccine czar does not know what he’s talking about.

Update: Kennedy’s response: “I am and have always been pro-vaccine. I want safe vaccines, robust and transparent science, and honest, independent regulators. And I want thimerosal, the mercury-containing preservative, out of vaccines. I’ve been fighting to get mercury out of fish for 30 years, but no one calls me ‘anti-fish.'” 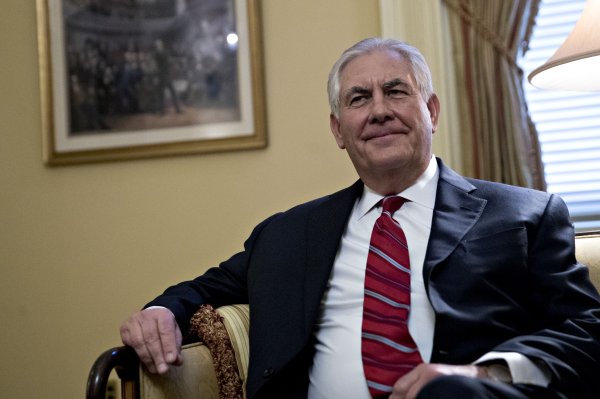 Donald Trump and Rex Tillerson Love Oil and It Really Hurts the Working Class
Next Up: Editor's Pick