Cory Booker Will Take an Unprecedented Stand Against Jeff Sessions

New Jersey Sen. Cory Booker said he will testify this week against Alabama Sen. Jeff Sessions—a move his office has said is unprecedented in Senate history.

“I’m breaking a pretty long Senate tradition by actually being a sitting Senator testifying tomorrow against another sitting Senator,” Booker said Monday in an interview with MSNBC. “Please understand, I think these are extraordinary times, and they call for extraordinary measures.”

Sessions’ confirmation hearings for the role of attorney general begin Tuesday. Booker told MSNBC that he plans to testify before the Senate Judiciary Committee on Tuesday or Wednesday.

“We’ve seen consistently Jeff Sessions—that’s Senator Jeff Sessions—voting against everything from the Matthew Shepard Act, voting against or speaking out against key ideals around the Voting Rights Act, taking measures to try to block criminal justice reform,” Booker said on MSNBC. “He has a posture and a positioning that I think represent a real danger to our country.”

Others have also raised concerns about Sessions’ stance on key issues, including voting rights, freedom of speech and religious freedom.

Booker’s office said the Senate historian has not been able to find a prior instance of a sitting senator testifying against another siting senator nominated for a White House Cabinet position, NBC News reported. 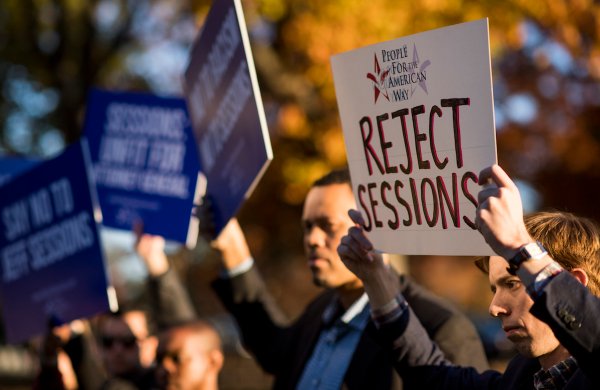 This Is Why the Senate Gets to Weigh in on Donald Trump's Cabinet Picks
Next Up: Editor's Pick