Khizr Khan, the father of fallen Army Capt. Humayun Khan speaks at a rally Hillary Clinton at The Armory at the Radisson Hotel in Manchester, N.H., Nov. 6, 2016.
Andrew Harnik—AP
By Tessa Berenson

“As a grateful patriot citizen I must voice my concerns, timely and loudly, on behalf of our beloved nation that the Civil Rights progress we have made thus far is threatened by this nominee for the office of the chief law enforcement officer of our nation,” Khan wrote in a letter to the Senate Judiciary Committee, released Monday by People for the American Way.

Khan became nationally known after an emotional speech at the Democratic National Convention in July about the death of his son and Trump’s comments on Muslims.

In his letter, Khan lists four reasons he opposes Sessions: voting rights, equal protection for religious and ethnic minorities, religious freedom and freedom of speech. On voting rights, Khan invokes a voter fraud case Sessions prosecuted against civil rights activists as U.S. attorney in Alabama in the 1980s, which led in part to the same committee he’ll face this week rejecting his nomination to be a federal judge in 1986.

“It is hard to understand, much less accept, his actions,” Khan writes.

Khan also referenced Sessions’ defense of Donald Trump’s proposed Muslim immigration ban and comments the senator allegedly made against the NAACP and the ACLU.

“I urge you to think beyond partisan politics as you consider this nomination. Thirty years ago, a bipartisan group of senators rejected Mr. Sessions’ nomination to be a federal judge,” Khan concludes, once again noting Sessions’ failure in 1986. “His record since then does not give us any reason to believe that those senators were in error.” 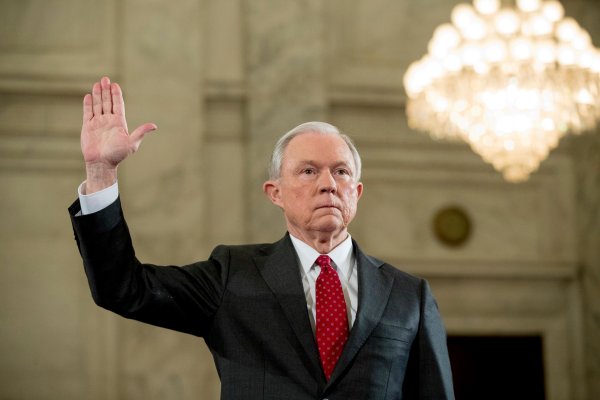 Jeff Sessions Hopes to Escape His History of Racial Controversy at Confirmation Hearing
Next Up: Editor's Pick