Trainers have killer whales perform for the crowd during a show at SeaWorld in San Diego, California, on March 19, 2014.
Mike Blake—Reuters
By Melissa Chan

SeaWorld San Diego’s killer whales made their final splash Sunday during the last performance of the marine park’s long-running theatrical show in California.

Thousands of people packed the stadium to watch the orcas leap into the air and perform tricks for the last time as part of SeaWorld’s “One Ocean” show. SeaWorld had announced last March that it was canceling its signature show to make way for its new “natural orca encounters” experience, which shows off the whales in a “more naturalistic setting” and does not feature them doing tricks.

“Sad to see it for the last time,” Donna Follis, an emotional guest, told Fox 5 San Diego while waiting in line. “We always have loved it so [there] will be some tears, but all fun.”

The theatrical killer whale show will next come to an end at SeaWorld San Antonio and then in Orlando. The show opened at all three SeaWorld parks in 2011.

The last show comes days after SeaWorld announced the death of Tilkum, a well-known killer whale who lived in the Orlando park and who was featured in the Blackfish documentary after killing a trainer. The film sparked calls for changes in how SeaWorld treats its killer whales. 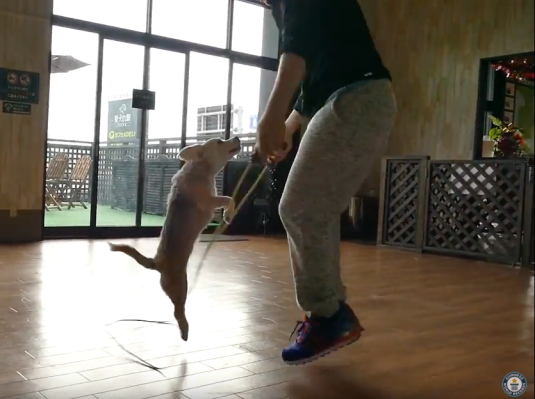 Watch This Energetic Dog and His Owner Break a Jump Roping World Record
Next Up: Editor's Pick