People Are Not Happy With Tom Hiddleston's Golden Globes Speech

Tom Hiddleston won his first Golden Globe Award on Sunday evening and attempted to use his acceptance speech to bring attention to the civil war gripping South Sudan. But in spite of his noble intentions, the Night Manager star was roundly criticized on social media by observers who found his remarks self-indulgent, tone-deaf, or just plain awkward.

During his speech, Hiddleston, 35, recalled a recent trip to the world’s youngest nation, where he worked with the United Nations Children’s Fund. While there, he was approached by a group of doctors and nurses with Doctors Without Borders who said they’d binge-watched The Night Manager during the previous month’s shelling.

Hiddleston was moved by “the idea that we could provide some relief and entertainment for people … who are fixing the world in the places where it is broken,” he said. He went on to dedicate his win “to those out there who are doing their best.”

According to social media feedback, however, many viewers were put off by Hiddleston’s comments, and some felt they trivialized a humanitarian crisis.

“That was a long story Tom Hiddleston told to pay himself a compliment,” TV writer Gary Janetti wrote on Twitter.

Actor Joshua Malina quipped, “Thank you to Tom Hiddleston and all actors who dare to perform in projects that are shown in some of the most dangerous parts of the world.”

Others expressed amusement at the seemingly puzzled reactions of several stars in the room: “The lack of interest in Tom Hiddleston’s story about his show is my everything,” journalist Dave Lozo tweeted. 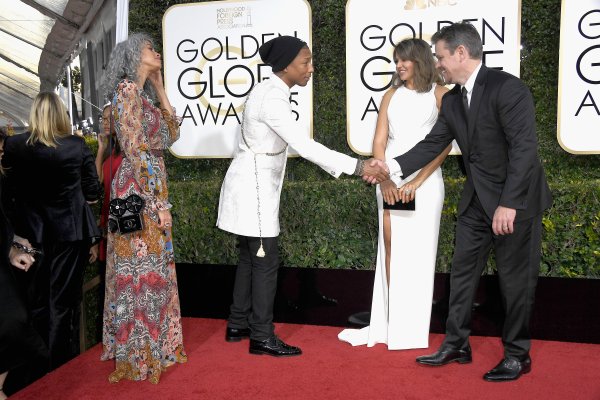 The Best Memes of the 2017 Golden Globes
Next Up: Editor's Pick