China Warns U.S. Officials Not to Talk to Taiwan's President

China warned U.S. officials Monday against all contact with Taiwan’s President Tsai Ing-wen after she met briefly with Republican leaders during a transit stop in Houston on her way to South America, ramping up its rhetoric in the wake of several incidents viewed by Beijing as breaches of diplomatic protocol by U.S. leaders.

Tsai’s stopover riled Beijing, which had reportedly asked the U.S. not to allow her entry, because it does not recognize her as the legitimate leader of the island off China’s eastern coast. Under the one-China policy, Taiwan is a Chinese territory that must be “reunified” with the mainland by force if necessary.

In an op-ed published in state media on Sunday, the Chinese government warned that Beijing would “take revenge” if incoming President Donald Trump did not uphold the one-China policy. Tsai rattled Beijing when she phoned the President-elect to congratulate him in the wake of his November election win. The fact that Trump took the call shocked Chinese leaders and Western analysts alike; no U.S. leader has had direct contact with a Taiwanese president since Washington established diplomatic relations with Beijing in 1979.

“The U.S. and Taiwan now should restrain, or be forced to restrain, themselves,” warned the Global Times, which is published under the direction of the Chinese Communist Party and is known as a government mouthpiece. The editorial went on to suggest that should President-elect Trump disregard Beijing’s policy, he would “ruin Sino-U.S. relations” and “destabilize the entire Asia-Pacific region.”

“If Trump reneges on the one-China policy after taking office, the Chinese people will demand the government to take revenge,” the column continued. “There is no room for bargaining.”

Read more: By Speaking to the President of Taiwan, Donald Trump Lays Down the Gauntlet to China

“It is widely expected that the mainland will impose further military pressure. Tsai needs to face the consequences for every provocative step she takes,” the editorial continued, after an ominous reminder that Beijing recently patrolled the airspace around Taiwan with fighter jets and sent an aircraft carrier cruising past its shores.

The U.S. shares a “robust unofficial relationship” with Taiwan, whereby Washington “acknowledges” the one-China policy and does not support Taiwanese independence, as outlined in a State Department fact sheet.

Many — if not most — of its residents view themselves as socially, politically and culturally distinct from the mainland and its communist leadership. Tsai herself has not endorsed the 1992 Consensus that established the one-China principle, and was swept into power on a tide of growing frustration with Beijing’s perceived encroachments on the island’s autonomy. Beijing has been anything but subtle in its warnings that budding independence movements in both Taiwan and Hong Kong, a special administrative region and former British colony, will not be tolerated. 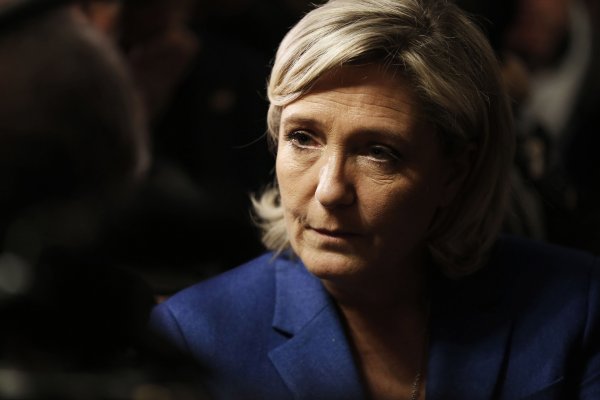 Why France's Marine Le Pen Is Doubling Down on Russia
Next Up: Editor's Pick