Relatives of prisoners react at a checkpoint close to the prison where around 60 people were killed in a prison riot in Manaus, Brazil on Jan. 2, 2017.
Michael Dantas—Reuters
By Feliz Solomon

Deadly gang-related violence continued in Brazil’s prisons over the weekend, with four people killed in a facility in the northern city of Manaus.

The BBC reports that three of the four victims were beheaded, in keeping with a trend of grisly violence between the country’s two largest drug gangs. The latest incident ended a week of deadly riots in the nation’s jails that has claimed nearly 100 lives.

Rioting began on Jan. 1 in a prison on the outskirts of Manaus, a city in the northern state of Amazonas that borders Venezuela, Colombia and Peru. The initial outbreak killed 56 people, making the incident the most deadly prison riot in the country since 1992.

Violence then spread to facilities in other parts of the country. A second riot in the neighboring state of Roraima left 31 dead on Friday, the Associated Press reports. Many were reportedly decapitated or disemboweled; some of the killings were captured on video and shared online.

“There was no confrontation, this was a killing spree,” Uziel Castro, the security secretary for Roraima state, told AP. “It was barbaric. Some were beheaded, others had their hearts or intestines ripped out.”

The initial clashes appear to have been sparked by a territorial rivalry between the São Paulo-based First Capital Command (PCC) and the Red Command, based in Rio de Janeiro. The two gangs reportedly ceased cooperating about six months ago when the PCC took over trading routes in the country’s south. The Red Command is aligned with a regional gang, the North Family, which controls riverine cocaine-smuggling routes, according to the BBC.

Since the violence erupted last week, 184 inmates have escaped from prisons in the north. Only 65 of them had been recaptured as of Thursday, according to AP.

Experts and human-rights advocates say the country’s prisons are overcrowded and underfunded, while recent austerity measures have further eroded the government’s ability to mitigate the problem. 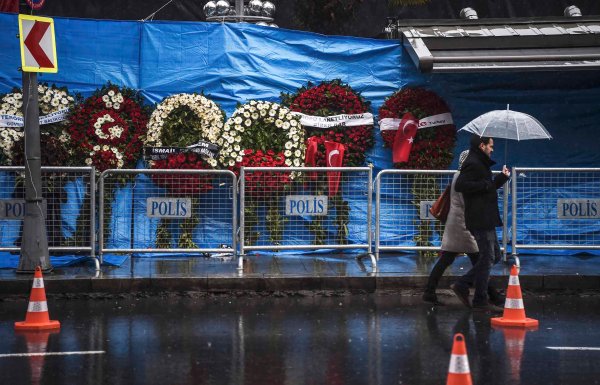 A Relentless Cycle of Terror Threatens to Tear Turkey Apart
Next Up: Editor's Pick