Jimmy Fallon’s Golden Globes hosting gig got off to a rocky start on Sunday night when the teleprompter went down at the beginning of his monologue.”I can think of something—cut to Justin Timberlake, please and he’ll just wink at me or something, this is great. You know what, I’ll make up this monologue.”

He made a few clunky jokes, including one about how Googling “Ryan Gosling penis” is not safe for work. But he mostly stuck to impressions, including one of fellow comedian Chris Rock. Rock apparently told Fallon that while the people behind The People v. O.J. Simpson are sure to win awards, nobody is willing to thank the man they truly could not have made the project without: O.J. Simpson himself.

Fallon also made a few political jabs—perhaps in a bid for redemption after being widely criticized for an affectionate interview with Donald Trump in the run-up to the election. He called the Golden Globes “one of the few places left where America still honors the popular vote.”

He also joked: “People are wondering what it would have been like if King Joffrey had lived,” Fallon said, alluding to the erstwhile evil boy king on Game of Thrones. “Well, in 12 days, we’re gonna find out.”

After the break, Fallon blamed the teleprompter flub on the same people Mariah Carey claims screwed up her New Years Eve show. “I just got off the phone with Mariah Carey and she thinks that Dick Clark Productions sabotaged my monologue.” 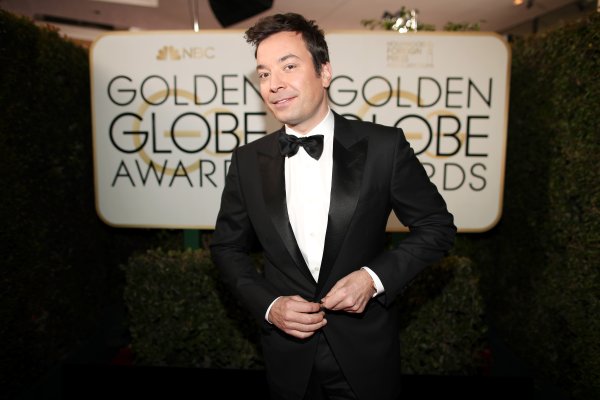