Ida B. Wells. Katharine Graham. Gwen Ifill. Jane Swisshelm? If one of these names doesn’t seem to belong, don’t worry—Swisshelm definitely earned her place on this list of legendary women in American journalism, but her name is little remembered today.

In fact, Swisshelm is counted by many as the United States’ first female political reporter, an accomplishment as legendary as her often over-the-top life.

Born to a Pittsburgh merchant in 1815, Jane began working as a young child when her father died of consumption. She received a patchy education while working at lace-making and painting velvet. At the time, she wrote, the highlight of her young career was earning $5 from a judge who commissioned a velvet portrait of the Goddess of Liberty. She attended boarding school for a period of time, but soon had to begin working at the school in exchange for tuition. She was eventually removed from school after a consumption scare of her own. She kept teaching, though, even after marrying a man named James Swisshelm.

Marriage did not agree with Jane. Nor did the fact that her new husband forced her to move in with her mother-in-law. “I was left without support or compensation for my services as tailor, teacher, dress-maker, for my husband’s family,” she recalled bitterly in a later memoir. Fiery and strong-willed, she clashed often with her husband and struggled to resign herself to a 19th-century woman’s sphere.

Then something happened that changed her life forever: She met the first slave owners she had ever encountered. Galvanized by her new knowledge of the conditions faced by slaves, she vowed to help them. She also moved away from her husband to tend to her ailing mother, teaching at a girls’ seminary to make ends meet.

Swisshelm began to write anti-slavery tracts, poems and articles that reflected her strengthening political views. She even started her own abolitionist paper, the Pittsburgh Saturday Visiter, which she financed with money from her dead mother’s estate.

A conflict over that estate also turned her into an advocate for the property rights of married women. When her mother died, she stipulated in her will that Jane’s husband inherit no portion of her estate, bequeathing it to her daughter instead. But under the laws of the time, a husband was entitled to everything his wife owned.

Embittered and politicized by her struggle for property of her own, Swisshelm began to build up her writing career as she became more and more estranged from her husband. She even became the first woman to report from Congress during a visit to Washington in 1850. In 1857, after over 20 years of marriage, she finally obtained a divorce, abandoning her husband and leaving her paper behind.

Now, Swisshelm joined the stream of westward migrants. She moved to St. Cloud, Minn., and started up her paper again as the St. Cloud Visiter. But her abolitionist, feminist views earned her some powerful enemies. She ran afoul of a man named Sylvanus Lowry, a political boss who flouted Minnesota law by refusing to free his slaves. She used the paper to taunt him, even after his cronies broke into her office by night and smashed her printing press. The incident only built support for Swisshelm’s paper. Then, Lowry brought a libel suit against her. Undeterred, she agreed to a settlement that required her to shut down the Visiter—then simply changed the name of her paper to the Democrat instead and kept publishing.

Seen from the distance of 150 years, Swisshelm’s abolitionist views were admirable, but some of her other beliefs were abhorrent. In 1862, a Sioux uprising resulted in the death of a group of white settlers. Swisshelm came out in force against the attackers, demanding that all Indians in the area be punished and driven out regardless of whether they were responsible. Though some historians claim that her desire to drive out the area’s Dakota Indians was because of her eagerness to show white settlers that the area was safe and habitable, her views contributed to the brutal expulsion of the Dakota people from Minnesota.

She believed so strongly in the punishment of Minnesota’s native peoples that she headed to Washington to plead with President Lincoln for reprisals. Little did she know that she would not return to Minnesota. Instead, she rekindled a friendship with a Pittsburgher who happened to be Lincoln’s Secretary of War. He offered her a government clerkship and she accepted. While she waited, she stayed in D.C., serving as a war nurse.

She never received the clerkship in question. After the war, she signed on to the cause of the radical Republicans—people who thought that the end of slavery should mean full equality for black citizens. These views (and her characteristically outspoken way of expressing them) infuriated President Andrew Johnson, whom she attacked on the regular, and she never became a government clerk.

Instead, she spent the rest of her life raising hell with her pen—a pointed weapon for a groundbreaking and often contradictory early female journalist the likes of whom most Americans had never seen before. Jane Swisshelm may not be well remembered today, but her fiery words helped build her profession. 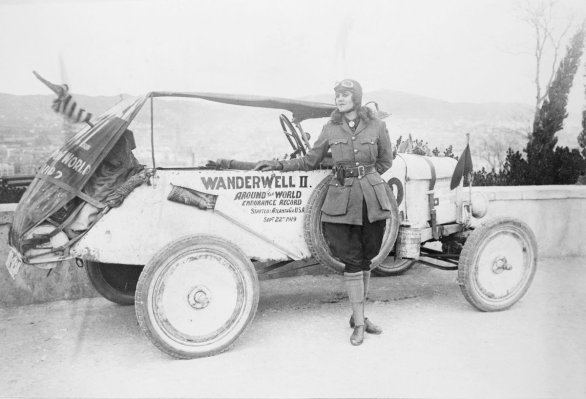 The Teenage Girl Who Circled the Globe in a Model T
Next Up: Editor's Pick