Viola Davis took home the Golden Globe for Best Supporting Actress in a Motion Picture Sunday night, for her role as Rose in the adaptation of the August Wilson play Fences. She began her speech by good-naturedly ribbing the Hollywood Foreign Press Association for taking five nominations to finally get her up to the winner’s podium. Still, the win was hardly a surprise—not only because of Davis’ powerful performance, or because she won the Tony for performing the same role onstage, but because the awards-season campaign for her has been strategic from the get-go. Davis could easily have been campaigned in the leading actress category, but her name was put forward in the supporting category to improve her chances thanks to what was perceived as a threateningly stacked lead actress field.

Davis, whose fellow nominees included Nicole Kidman, Michelle Williams, Octavia Spencer and Naomie Harris, continued by acknowledging the infrequency with which Hollywood invests in movie adaptations of plays. “It doesn’t scream money-maker but it does scream art; it does scream heart,” she said. Wilson’s play, first performed in 1983, centers on a former Negro League baseball player and his family in 1950s Pittsburgh.

Davis also thanked costar and director Denzel Washington, who is also nominated for a Golden Globe for Best Actor in a Drama, before paying tribute to her father, whom she compared to the movie’s protagonist, Troy Maxson. Davis said her father, Dan Davis, was born in 1936, groomed horses and didn’t know how to read until he was 15 years old.

“But you know what?” she asked. “He had a story, and it deserved to be told, and August Wilson told it.” 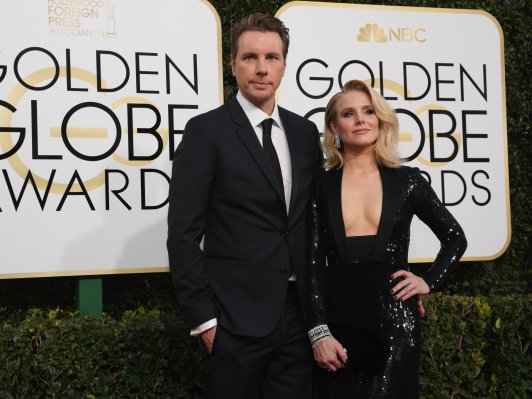 Kristen Bell and Dax Shepard Have the Nerdiest of Plans After the Golden Globes
Next Up: Editor's Pick