A Relentless Cycle of Terror Threatens to Tear Turkey Apart

A couple walk past the Reina nightclub on January 5, 2017 in Istanbul, days after a gunman killed 39 people on New Year's night. The gunman who killed 39 people at an Istanbul nightclub had fought in Syria for Islamic State jihadists, a report said on January 3, as Turkish authorities intensified their hunt for the attacker. Of the 39 dead, 27 were foreigners, mainly from Arab countries, with coffins repatriated overnight to countries including Lebanon and Saudi Arabia. / AFP / OZAN KOSE (Photo credit should read OZAN KOSE/AFP/Getty Images)
OZAN KOSE—AFP/Getty Images
By Jared Malsin / Istanbul

A cold rain fell outside Istanbul’s Reina nightclub on Friday afternoon, six days after a gunman burst into the crowded bar and killed at least 39 people celebrating New Years Eve. Heaped against a police barricade at the club’s entrance were tributes laid in mourning: Flowers, portraits of the dead, and Turkish flags. A young woman walked up to lay a handful of red flowers on the pile, and then paused in silent prayer.

The public mood in Turkey is turning darker as the rate of internal violence increases. Days after the club shooting, a car bombing killed at least two people in the coastal city of Izmir, in an attack attributed to Kurdish militants. In December, a deadly car bombing killed more than 40 people at a major Istanbul soccer stadium, and a police officer shot dead Russia’s ambassador in Ankara. The bloodshed has become endemic over the past year and a half, as Kurdish separatist militants and Islamic State jihadists have slaughtered hundreds, and an abortive military coup attempt left more than 200 people dead and sparked a wave of repression by President Recep Tayyip Erdogan.

Yet rather than unite the country in mourning and solidarity, the recent wave of attacks appears to have deepened internal divisions between secular and more religious conservative citizens, as well as between minority Kurds and Turkish nationalists. The acceleration of violence deals a blow to an already reeling economy, and hands the government more ammunition to pursue its clampdown on critics. “Both on ISIS’ part and on PKK’s part, they’re trying to force Turkey to snap, snap between multiple things here, so it could be the populace snapping against Ankara. It could be Ankara snapping,” says Selim Sazak, a researcher with The Century Foundation think tank. “I just think they want to force the system to fail, turn the heat up.”

The parallel series of terror attacks by ISIS and by the Kurdistan Workers Party (known by the acronym PKK) have unfolded according to separate patterns and strike different targets. Kurdish militants have primarily targeted the security forces and state institutions, although civilians have also died in their attacks. ISIS’ campaign of terror is indiscriminate, hitting tourist sites, a peace rally, and Istanbul’s main airport. But both groups share the goal of undermining the country’s stability.

ISIS claimed responsibility for the Jan. 1 attack on the nightclub, marking the first time the group acknowledged its operations inside Turkey, a country it has taken advantage of in years past to transport fighters into Syria and for elaborate smuggling operations. In August 2016, Turkey sent its armed forces across the border into Syria, expelling the ISIS fighters from a swath of the border they previously controlled, severing the group’s most important artery to the world outside its self-proclaimed caliphate. As its territory shrinks under pressure from Turkey as well as operations by Syrian and Iraqi forces, ISIS continues a long established pattern of striking civilian targets far from the battlefields of Syria and Iraq. In December, an ISIS propaganda chief called specifically for attacks on Turkey.

The Reina attack appears to have been designed to exploit internal divisions in Turkey, where a secular, urban, outward-looking population exists uneasily alongside conservative and religious people. It renewed a prior debate within Turkey between liberals and some conservative Islamic figures who criticize Christmas and New Years as un-Islamic western imports. It is also raised the possibility that ISIS sought to inspire sympathy for the shooting among religious hardliners in Turkey. If that was the group’s aim, there is some evidence it succeeded. Following the attack, Turkey’s interior ministry launched an investigation into 347 social media accounts who allegedly “posted in support of terror.”

The government’s clampdown on political opponents and critics is expected to intensify, amid the continuing attacks. After surviving the failed military coup attempt in July, Erdogan’s government rounded up thousands of people suspected of involvement in the coup plot or ties to the movement of Fethullah Gulen, the U.S.-based cleric accused of masterminding the attempted putsch. The crackdown soon widened to include journalists and opposition activists. The authorities shut down dozens of media organizations and hundreds of NGOs. In November, police arrested members of parliament from the Turkey’s pro-Kurdish opposition party, which controls the third largest share of the legislature. Following the Reina attack, the government also extended the state of emergency in place since the coup attempt.

Down the street from the Reina nightclub on Friday afternoon, a few dozen men assembled in a somber march of defiance. Riot police lined up in the road running parallel to the Strait of the Bosphorus, the waterway that runs through Istanbul and divides Europe from Asia. The demonstrators chanted “Allahu Akbar!”—God is great! They paused near the police to sing the Turkish national anthem. They carried a black banner reading, “May our blood run dry if we forget.” 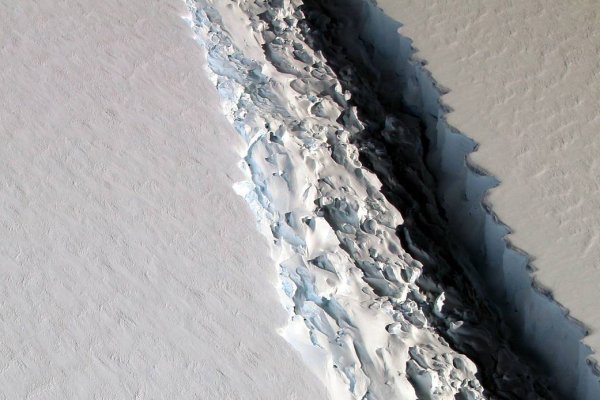 An Iceberg the Size of Delaware Is Set to Break Off From Antarctica
Next Up: Editor's Pick