A transgender man is suing a Catholic hospital in New Jersey after he says it refused to allow his hysterectomy on religious grounds.

Jionni Conforti’s doctors concluded that a hysterectomy was medically necessary for him, so he found a surgeon and scheduled the procedure at St. Joseph’s Regional Medical Center in Paterson in 2015. He didn’t expect any problems —until a hospital administrator told him they could not allow his surgery because it was a “Catholic hospital,” he alleges in the federal lawsuit.

“Being humiliated and rejected by a hospital because of who you are as a person is not okay,” Conforti, 33, told TIME.

St. Joseph’s allegedly denied Conforti’s surgery despite having a “patient’s bill of rights” that guarantees medical service without discrimination based on categories including “gender identity or expression.” The hospital did not immediately respond to a request for comment.

While Conforti found another hospital to perform his hysterectomy three months later, he said he felt betrayed and became depressed after St. Joseph’s denied his surgery. He pointed to the high rate of suicide among transgender people, saying that an experience like his can make transitioning even harder.

“My goal is to make a change for the up and coming trans people so they never have to go through this,” he said.

Conforti, who is represented by Lambda Legal, is seeking monetary damages and to require the hospital to perform any needed medical care for transgender patients. 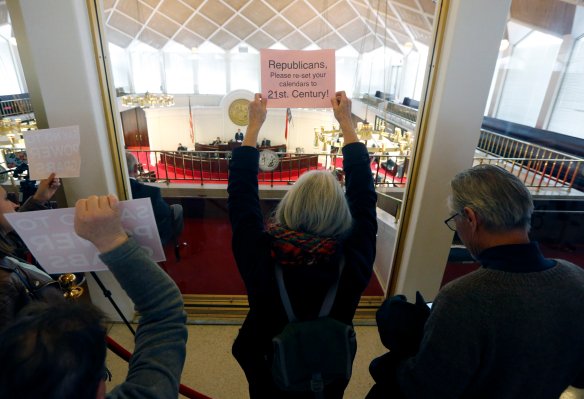 'Bathroom Law' Remains on the Books In North Carolina
Next Up: Editor's Pick