Few people in Washington ever get a do-over. But on Tuesday, Alabama Sen. Jeff Sessions will face the same congressional body that denied him a federal judgeship in 1986, this time in hopes of becoming Attorney General. And his odds of getting through the panel to become Attorney General are far better than the last time around.

That doesn’t mean Sessions’ time in the spotlight will be easy. Democrats plan on tangling with the nation’s potential top lawyer on his Senate record on justice and civil rights issues. The history of racially insensitive comments that sunk his last nomination will be a starting point. “Then the question is what has he done in the rest of his career in public office?” says Marge Baker, executive vice president of People for the American Way, of the role 1986 should play in this week’s hearings.

Minority Leader Chuck Schumer says Democrats should focus on Sessions’ record on immigration and voting rights. “He has been more anti-immigration than just about any other single member of Congress,” Schumer said on Jan. 4 in response to a question from TIME. “And in the past, Senator Sessions has been no friend to the Voting Rights Act. The attorney general is the protector of voting rights.”

Sessions was the first sitting senator to endorse Donald Trump and holds hard-line views on immigration. He is against a path to citizenship and has opposed almost every immigration reform bill before the Senate that includes one. He’s also in favor of curbing legal immigration. But his positions on civil rights issues are difficult to paint with a broad brush. He voted in 2006 to renew the Voting Rights Act for 25 years, and then cheered in 2013 when the Supreme Court struck down key provisions of the law. In the late 1990s, he co-sponsored legislation to honor Rosa Parks with the Congressional Gold Medal, while also voting against 2009 legislation that extended federal hate crime protections to people targeted because of their sexual orientation or gender identity.

Connecticut Senator Richard Blumenthal said he’s concerned about Sessions’ record on civil and voting rights, and Vermont Sen. Patrick Leahy, who is the only person still in the Senate who voted against Sessions in the 1986 hearing, spotlighted crimes against Muslims and LGBTQ Americans in a statement. Illinois Senator Dick Durbin, who co-sponsored a bill with Sessions in 2010 to reform crack cocaine sentencing, wants to hear from him on criminal justice reform and policing.

“I would say at the end of it that there were no breakthroughs in terms of positions,” Durbin said after meeting with Sessions on Jan. 4 and failing to secure promises from him on funding and reforms for the Chicago police department. “He and I were pretty familiar with each other’s positions on a lot of major issues.”

But Sessions won’t need any of these committee members to get confirmed. If each member votes with his or her party, Sessions will pass the committee by a vote of eleven to nine. And there are no signs that any Republicans will defect, either in the committee or on the Senate floor. Maine’s Susan Collins, widely considered the most moderate Republican in the Senate, will introduce Sessions tomorrow.

The history of Sessions’ last failure before the committee will still frame the hearing. He once lamented that he could be “loose with [his] tongue” has been diligently preparing for the upcoming hearings. In 1986 when President Reagan nominated him to be a federal judge, Sessions’ hopes were dashed by comments he had made that some people found racially insensitive and a voter fraud case he had prosecuted as U.S. attorney in Alabama.

The most inflammatory comment brought to light in 1986 was from when Sessions was working with Justice Department lawyers on a 1983 investigation into a Ku Klux Klan murder of a black teenager. When Sessions learned that the Klan members had been smoking marijuana the night of the lynching, he said, “I used to respect them, but if they smoke pot, I sure can’t,” according to a Justice Department lawyer at the time. Of the three lawyers who heard Sessions’ comment, two said they understood it as a joke, which is how Sessions testified he meant it to be interpreted. The third, who is black, said he was offended and took it as a serious comment.

The other fatal blow in Sessions’ 1986 hearing centered on a voter fraud case from the year earlier against the “Marion Three”: Albert Turner, a civil rights activist who advised Martin Luther King Jr, his wife Evelyn, and activist Spencer Hogue Jr. (The questionnaire Sessions recently submitted to the judiciary committee goes into great detail about this case, suggesting he assumes it could resurface this week.) The case alleged that Turner and supporters were illegally altering votes on absentee ballots. The Marion Three say they were helping illiterate voters and only changed ballots when asked. Critics of Sessions claim the case is evidence that he attempted to suppress black turnout in his home state, whereas he says the prosecution was legitimate and stemmed from complaints from black local officials. A jury acquitted the defendants of all charges.

“I am not the Jeff Sessions my detractors have tried to create,” Sessions said at the 1986 hearing. “I am not a racist. I am not insensitive to blacks. I have supported civil rights activity in my state.” The Republican-led committee rejected his nomination by a vote of ten to eight.

The setback didn’t hamper his career. In 1995 he became state attorney general and the following year he was elected to the Senate, going on to become a member of the very committee that rejected him. He is now off the committee as it considers his nomination this week.

Despite the passage of more than 30 years, the legacy of the Marion Three case still looms over Sessions in the press. Albert Turner passed away in 2000, but Evelyn and their son Albert Turner Jr. have both been vocal ahead of Tuesday’s hearings, albeit with very different memories of Sessions. Evelyn Turner told the Washington Post in December that she “won’t forget” Sessions’ prosecution of her and her husband, and that she refused to greet the Senator warmly at an event in February 2016. “I don’t want to hug you. You tried to send us off for . . . years,” she recalled saying.

Yet Albert Turner Jr., now Perry County Commissioner, released a letter last week endorsing Sessions for Attorney General. “I have known Senator Sessions for many years, beginning with the voter fraud case in Perry County in which my parents were defendants,” he wrote. “My differences in policy and ideology with him do not translate to personal malice. He is not a racist. As I have said before, at no time then or now has Jeff Sessions said anything derogatory about my family… I believe that he is someone with whom I, and others in the civil rights community can work if given the opportunity.”

There are still many who oppose to Sessions on civil rights grounds: the president of the NAACP and five others were arrested last week after staging a sit-in at Sessions’ Alabama office. But Republicans hope that Turner Jr.’s statement will take some of the teeth out of Democratic opposition on this point, with Sessions spokesperson Sarah Flores calling his letter “extremely important.”

“I’m going to listen to the civil rights groups and the advocates and the activists, and I’m listening to Senator Sessions and his responses to the criticisms that have been made of him,” Blumenthal, who co-sponsored a bill with Sessions in 2011 to help track fugitive sex offenders, said of whether allegations of racial insensitivity would play a role in the hearings. Durbin told reporters that he had given Sessions a copy of the book White Rage by Carol Anderson, about white Americans’ efforts to disenfranchise African Americans post-Civil War, at their meeting last week.

One other crucial difference between the upcoming hearings and those in 1986, however, at least in context, is that this time Sessions will be facing a panel of his colleagues. “We’re very friendly,” Schumer said of his relationship with Sessions, although he joked that even their time in the gym together isn’t a safe space from partisanship. “We’re on the bikes next to each other oftentimes watching Morning Joe and making diametrically opposed comments about what’s going on,” Schumer said.

“There’s a personal side to this thing,” echoed Durbin, who also said he hits the gym with Sessions. “[Secretary of State nominee] Rex Tillerson, he could be standing in the back here now and I wouldn’t be able to pick him out of the crowd. But I sure know Jeff.” 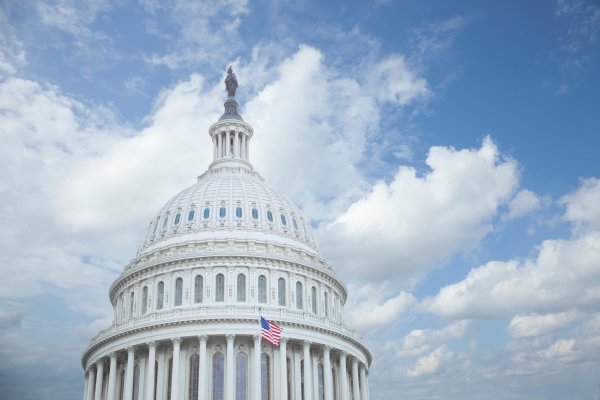 Watch Congress Count The 2016 Electoral Votes
Next Up: Editor's Pick