Here's How to Get Rid of Your Unnecessary Stress

Life is stressful: You’ve got bills to pay, loved ones to care for (of the two-legged and four-legged variety), a home to maintain, plus possibly a paying job on top of that… you know the rest. In fact, according to the most recent Stress in America Survey by the American Psychological Association, women report an average stress level of 5.3 out of 10—and Gen X and Millennials overall have average stress levels between 5.8 and 6 (Boomers are 4.3 on average, and you can thank your mellow grandmothers and great-aunts of the generation dubbed “Matures” for bringing down the overall female stress level).

The secret to getting more mellow? Identify the unnecessary stressors on your life and shed them, once and for all. Here’s how

The Stressor: The Friend Who Brings You Down

You know this friend: the one you agree to meet for lunch, then cancel on at the last minute because you just can’t even. It doesn’t matter why you feel this way—maybe she only talks about herself, maybe she’s a master at backhanded compliments, maybe she’s plain annoying. “If you dread getting together with someone, that’s a sign you can’t ignore,” says Deborah Carr, a sociology professor at Rutgers University and author of Worried Sick, How Stress Hurts Us and How to Bounce Back. “Trust your instincts and selectively cut back on time with them.” But don’t be passive about it—a recent study published in Frontiers of Psychology found that subjects who actively confronted their stress felt a greater sense of control and well-being than those who avoided it altogether. The easiest way to do this: Don’t make plans with this person—then you won’t have to feel guilty breaking them.

Related: 9 Small Cleaning Resolutions That Will Make a Big Difference

The Stressor: Being Chronically Late

Imagine how relaxed you’d be if you showed up to your next appointment—whether a business meeting, a physical exam, or a date with the in-laws—on time? You can, says Carr. “This is controllable,” she promises. “You just have to build your lateness into your schedule.” Include travel time in your calendar, so that for an appointment that actually starts at 10 am you block off time starting at 9:30. And always assume you’ll get held up: Get in the habit of taking the earlier train or bus and allowing an extra 15 minutes for traffic (or more, if you’re near a city). Carr’s final advice: “Step away from your screen! We always think, I’ll just check one more email—but that can spiral into a half-hour and the next thing you know, you’re late.”

The Stressor: A Messy House

It starts off so simply: You’ve got to rush to make dinner, so you stick Monday’s mail on the counter and vow to go through it later. But later you just want to relax, so you push it off till tomorrow… where you repeat the process. Now it’s Saturday, the pile is ready to topple, and the last thing you want to do is open junk mail and sort bills for the next hour. “We procrastinate, clutter accumulates, and it saps our energy and affects our productivity,” says Hall. The instinct is to ignore it, feeling guiltier the longer you do. Instead of feeling shame and frustration, Hall suggests reframing the mess: “Don’t judge yourself—feel empowered!” she encourages. “See it as a call to action, where you’re in control.” Instead of feeling punished by, say, an afternoon spent in the black hole of your closet, sketch out an action plan (using these pro organizing tips), tape it to your wall, and make sure you’ve planned for something you love waiting for you when you’re done, whether it’s Hall’s favorite, a Diet Mountain Dew, a manicure, or a night out with your partner. (As for that mail, take the 45 seconds to open and sort it daily, and never let catalogs drive you batty again.)

The Stressor: Confrontations You Need to Have

If it makes you feel better, you’re not the only one who has imaginary difficult conversations with people while you’re washing dishes, shaving your legs, or taking the dog for a walk. It’s called ruminating, says Carr, and if you don’t find a way to stop it, you’ll just keep going (and stressing, and thinking, and stressing, and thinking…). “Confrontation is hard for some of us,” she says. “Control it by imposing deadlines on how long you’re willing to consider something. Take 10 minutes to think about the issue, write up talking points for yourself, then set it aside.” Next step:Have the conversation. Because once you do, your brain can move onto other, more peaceful thoughts.

The Stressor: Not Being Able to Say No

Chances are, if you’re not good at saying no, not only do you know it, but others do, too. And the more people ask you to do something for them, the more stress you feel—from the minute you say yes to the minute the request (for a ride, a recommendation, a batch of cookies) is completed. The easiest way to shed that stress is to learn to let “Nope” roll right off your tongue. Until then, try reframing your “no” as a way to pay it forward, says Carr. “If you’re asked to do something at work, delegate the task to a junior person who might appreciate the opportunity,” she explains. “If you bought a concert ticket and simply don’t want to go, give your ticket to someone who will enjoy the experience.” And don’t use guilt as a reason to say yes to things, warns Carr—it can backfire. “Think about what will happen if you take on that tenth task and do a bad job, versus if you just declined in the first place,” she says.

Related: 5 Times It’s Hard to Say No (And How to Do It Anyway)

When it comes to family, it may feel like you’re stuck with them. But if you get sweaty palms, a sinking feeling, or the urge to book an international flight before every get-together and celebration, it’s time to face your truth: Your family is stressing you out. The other truth: It doesn’t have to. “When you notice where your triggers are, you’ll feel more mindful and in control,” says Hall. Think before you go: Is it Mom’s passive-aggressive jibes? Your cousin’s jealous streak? The way your Dad favor’s your nieces and nephews over your own kids? Once you identify the problem, decide to change the way you usually react. “People may drive you insane,” says Hall. “But how you respond is on you.” Instead of feeling like the victim, take charge: Ignore Mom’s negative remarks and instead steer the conversation toward your recent accomplishments—or, if your cousin’s in the room, toward the latest Netflix reunion series. “When you know what you’re dealing with, your energy will swell,” says Hall. And if all else fails? Spend less time with your family, advises Carr. “Breaking away from certain relationships or obligations can be freeing,” she says.

The Stressor: Things You Said and Did in the Past

Yesterday’s fight with your husband. The dramatic way you left your last job. When you keep rehashing a situation in your mind—knowing very well it won’t change what happened—you’re stuck in a rumination loop. “Studies show rumination has stressful effects above and beyond the actual stressor you’re ruminating about,” says Carr. “In effect, you keep reliving the situation.” To break the cycle, she advises, “Stop yourself and think, Is there a lesson here? If so, learn from it and walk away. If not, realize that sometimes things go badly—and recognize that you won’t do it again.” Another way to push past the stress: Get a friend’s perspective. “Have them be the voice of reason to help you get out of your own head,” says Carr. “We all think we’re important, but chances are, you’re the only one still thinking about whatever you said or did.” 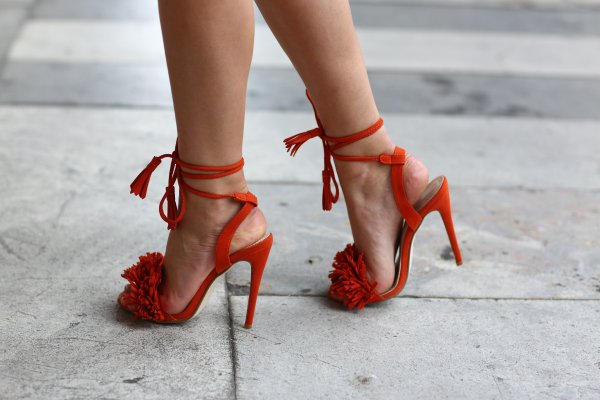 These Office-Friendly Shoes Are on Sale Right Now
Next Up: Editor's Pick