At the Women’s March on Washington the day after the inauguration, thousands will likely be donning pink “pussy power hats” in solidarity.

The bright pink hats with cat ears are being hand-knit by marchers or volunteers as a way to show solidarity before and during the March, with a not-so-subtle nod to President-elect Donald Trump’s “grab ’em by the pussy” comment. Screenwriter Krista Suh and architect Jayna Zweiman started the Pussyhat Project around Thanksgiving as a way to unite the March’s supporters, including those who may not be able to attend, they told the Huffington Post.

“Everyone can participate,” Zweiman, who won’t be able to go to the March, told the Huffington Post.

She and Suh posted a “pussy power hat” pattern online that more than 60,000 people have visited, and they estimate knitters have already made anywhere from 30,000 to 100,000 hats, according to Huffington Post. The project’s founders said they have no way to tell the precise number of hats because people can wear them themselves or give them to marchers, but they have created a registry and set up drop-off points at participating knitting stores around the country.

Tens of thousands of people are expected to take part in the Jan. 21 Women’s March on Washington, which started as a Facebook event after Trump marked his campaign with demeaning language towards women, dismissals of sexual assault allegations and threats of restricting reproductive rights.

Suh told the Huffington Post she hopes the hats become a lasting symbol, “long after the march.” 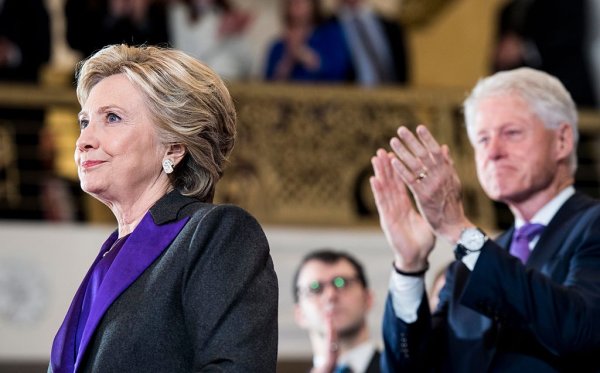 Hillary and Bill Clinton to Attend Trump's Inauguration
Next Up: Editor's Pick