Bernie Sanders spoke on the Senate floor on Wednesday to urge Donald Trump to veto any cuts to Social Security, Medicare or Medicaid—and used one of the President-elect’s own tweets to prove his point.

As lawmakers debated the repeal of Obamacare, Sanders pointed out that Trump had previously said he would not cut the services through a giant printout of a tweet dating to May 2015.

“I was the first & only potential GOP candidate to state there will be no cuts to Social Security, Medicare & Medicaid,” Trump claimed at the time. “Huckabee copied me.”

Sanders said Trump should either admit he was lying or say he will veto any forthcoming cuts.

“Millions of people voted for him on the belief that he would keep his word,” he said. “If he was sincere, then I would hope that tomorrow or maybe today he could send out a tweet and tell his Republican colleagues to stop wasting their time and all of our time. And for Mr. Trump to tell the American people that he will veto any proposal that cuts Medicare, that cuts Medicaid or that cuts Social Security.”

Photos of Sanders speaking alongside a blown up printout of Trump’s tweet circulated social media and quickly became a meme. 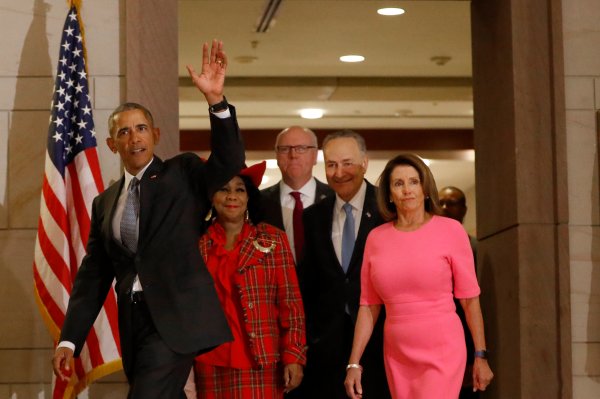 Obama to Democrats: 'Look Out for the American People'
Next Up: Editor's Pick