How We Can Kill Terrorism With Kindness

Displaced people fleeing from Boko Haram incursions into Niger carry boxes of oil during a World Food Programme (WFP) and USAID food distribution at the Asanga refugee camp near Diffa on June 16, 2016.
Issouf Sanogo—AFP/Getty Images
Ideas
By Jacob N. Shapiro
Shapiro is professor of politics and international affairs at the Woodrow Wilson School of Public and International Affairs at Princeton University, co-director of the Empirical Studies of Conflict Project and author of The Terrorist’s Dilemma: Managing Violent Covert Organizations.

Recent attacks in Istanbul and Berlin remind us that preventing violent extremism must be a policy priority for the incoming Donald Trump administration. The last decade has shown that our good intelligence will never prevent every terrorist attack, and our aggressive reactions will never kill or scare away every potential terrorist. But we can do a better job of stopping the terrorist plots in the first place. The way to do this is to get communities that produce and harbor attackers to view America and the West more favorably.

Targeting terrorist groups overseas is not enough. Tools of terror are everywhere. From the readily available explosive components to the semi-automatic weapons that can be purchased everywhere (including online) to the vehicles we drive every day, a would-be attacker has an almost infinite set of options. We need to intervene early, and the only way law enforcement can do that is with the cooperation of the communities within which potential terrorists live.

In many recent cases of terrorism, someone in the community knew about activities that took place long before the attack that could have triggered an investigation. For example, months before the March 2016 Brussels attacks, a neighbor of the perpetrators alerted police to their odd behavior, but the tip was not followed up aggressively.

The best sensors for identifying these activities are friends, neighbors, religious figures and civic leaders. Indeed, a recent RAND Corporation working paper reviewing 150 successful and foiled attacks in the United States from 1995 to 2012 found that the initial tip to law enforcement came from the public in almost 30% of the foiled attacks. There is nothing new about the police working with communities to fight crime; effective police forces like the NYPD have long engaged with community members to identify would-be criminals and activity. But this approach takes on new importance when counterterrorism is a core law enforcement task.

There are a couple of national-level policies that can help law enforcement obtain information about those who move towards carrying out attacks, as well as reduce the likelihood that individuals radicalize in the first place.

First, we need to avoid actions that feed into our enemies’ arguments about us—creating a watch list of all Muslims, for example. Policies that feed our adversaries’ narratives make it harder to get information from communities. Second, we should look for opportunities to improve America’s brand among the communities at home and abroad whose cooperation we need to prevent terrorist attacks.

The old adage that you catch more flies with honey than vinegar applies to counterterrorism. Conspicuous generosity to the innocent victims of terrorism presents a huge opportunity for public diplomacy. For example, we could do more to help refugees who are clearly victims of terrorist activity. Helping refugees will remind potential supporters of violent groups and, more importantly, their communities, of the vast difference between how the West treats victims of conflict and how they are treated by terrorists at home.

This does not necessarily mean letting more refugees into the United States. Reasonable people can disagree on how big (or worthy) the risks of generous refugee and asylum policies are. But there is no risk and much gain from helping out refugees abroad. USAID could greatly increase programming in refugee camps in the Middle East, or targeted funds could be provided to help our European partners handle the refugee flows from the wars in Afghanistan, Iraq and Syria. That support could take the form of clearly branded services in refugee camps or support for training and integration programs in countries hosting refugees. What matters in these efforts is that America lead by example in a way the whole world can see. There needs to be no question about our commitment to helping the victims—whomever they are—of radical terrorism.

President-elect Trump knows better than most politicians the value of a brand. His administration can take actions immediately after his inauguration to renew America’s brand by setting an example of conspicuous generosity towards refugees. Doing so will arm local law enforcement across the world with a powerful argument for why people should trust and engage with them and will make it harder for terrorist groups to find new recruits.

Stopping attacks like the ones that so recently marred Germany’s Christmas season or Turkey’s New Year celebration requires more than a clear-eyed naming of the threat. Doing so requires getting cooperation and intelligence from the very communities that would-be attackers live in. Conspicuous generosity will do far more to gain that cooperation and to prevent attacks than merely applying a name to the attackers’ motivating ideology. 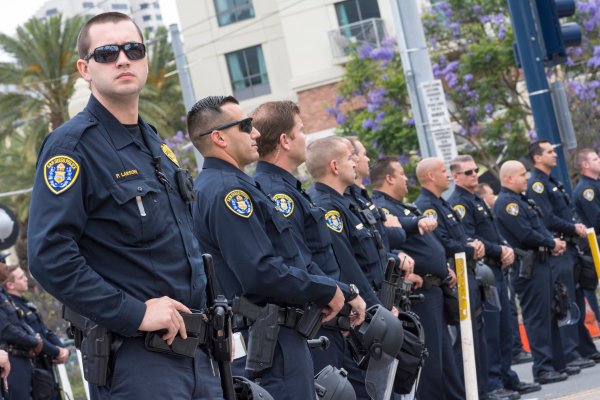 How To Fix The American Cop
Next Up: Editor's Pick