A Samsung logo in the Mobile World Congress 2015 in Barcelona on March 3, 2015.
David Ramos—Getty Images
By Lisa Eadicicco

Since Google announced plans to make its Chromebooks compatible with Android apps last May, dozens of Chrome-powered laptops from companies like Acer, Asus, and Samsung have started running them. Now that selection is getting a little larger, as Samsung on Wednesday announced two new Chromebooks that will be able to run the same apps as any Android smartphone.

Samsung’s Chromebook Plus and Chromebook Pro will also include a touchscreen that can rotate 360 degrees, effectively turning it into a tablet. This flexibility, combined with their ability to run Android apps, allow them to simulate the experience of using an Android tablet. Still, users should bear in mind that the version of the Google Play Store preinstalled on these Chromebooks is still in beta.

Both notebooks will also come with a stylus that can be used to highlight content or jot down notes, among other tasks. Samsung is also playing up the stylus’ compatibility with its ArtCanvas program for sketching and Google Keep for note-taking. Samsung has emphasized similar functionality on its line of large-screened Galaxy Note smartphones in the past, which come with Samsung’s S-Pen for accessing shortcuts and scribbling reminders on screen.

The new Chromebooks will both feature a 12.3-inch 2,400×1,600 resolution display, which is notably sharper than that of most rivals. The Pro model will run on one of Intel’s Core m3 processors and is launching this spring for a yet-unstated price, while the Chromebook Plus is powered by an ARM processor and is coming in February for $449. The Pro and Plus will each come with two USB-C ports, 4GB of RAM, and 32GB of storage space.

The $449 starting price puts Samsung’s Chromebooks at the higher end of the market. Other models that include touchscreens, support Android apps, and feature flexible designs, like the Asus Chromebook Flip, cost as little as $249. Samsung’s announcement comes after the Pro model leaked through online retailer listings in October. 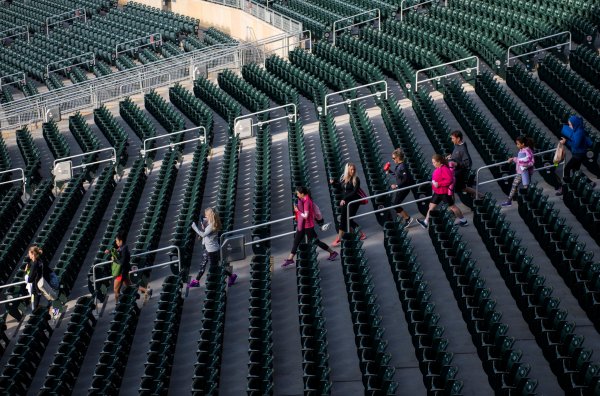 These 10 States Are the Best at Keeping New Year’s Fitness Resolutions
Next Up: Editor's Pick