I’m a Woman with a Disability Who Voted for Donald Trump. Here’s Why

My whole life I have cast off the labels and stereotypes others foisted upon me. Thus, politics-by-category annoys me. Unfortunately, in the 2016 presidential election cycle, America seemed convinced by the narrative that the winner could be predicted by the number of voters who fit into the categories embodied by the two major candidates. The thinking went: Since most voters are women, of course Hillary Clinton would be the next President. Conventional wisdom also held that a white conservative newcomer couldn’t possibly beat a liberal who appealed to a wide swath of minority voters.

I’ve always been rather difficult to categorize. Born with a disability, it took until very recently for doctors to truly nail down a diagnosis. It changed with the evolution of medical technology from Cerebral palsy to congenital neurological malformation with hydrocephalus to, finally, spina bifida with hydrocephalus. But I’ve always felt and analyzed things deeply. While I flirted briefly in college with supporting certain Democratic candidates, I’ve always considered myself a conservative Republican. One of my earliest childhood memories is of dictating a letter to my father to be sent to President Nixon about something that my four-year-old self felt needed discussing.

The assumption that I was going to vote for Hillary Clinton just because she is a woman amused me. The assumption that I couldn’t possibly vote for Donald Trump because I have a disability infuriated me. No one ever thought to ask me what my principles were. They looked at my packaging and assumed because of my gender, my last name (I married into a fully assimilated Latino family) and my disability.

Part of that assumption was because of Trump’s mocking of New York Times reporter Serge Kovaleski, who has arthrogryposis, in November 2015, which I didn’t like at all—and the lack of accessibility at campaign events, which I didn’t like either. But I didn’t let those factors cloud my judgment. Yes, I’ve been mocked before, too. Although hurtful, it’s helped me grow a really thick skin—and realize that some people don’t understand how such things come off. When given a chance to do so discreetly, I’ve addressed mockers and tried to help them understand that behaving in such a way isn’t the best approach when in an uncomfortable situation. I’ve seen that people who’ve acted like Trump did that day can change, especially when they come to know someone with a disability.

Besides, the election cycle began for me months earlier, with Senator Ted Cruz’s announcement in March 2015. I remained heavily involved as a professional volunteer (in that my expenses were paid for, but I made no money) with his campaign until he suspended it in May of 2016, when a path to the nomination became unattainable. After his suspension, well-meaning friends urged me to jump aboard the Trump Train. I didn’t immediately make up my mind. For me, it was a loyalty issue. Could I support someone who had so stringently opposed the candidate of my choice and who was as different from him personally as one could be?

I wrestled with what my vote would be, especially in light of the binary choice between conservativism and liberalism that Sen. Cruz reminded us of when he announced Trump would receive his vote. The tipping point came for me in a conversation with Dr. Charmaine Yoest, who reminded me that policy must always come before personality in the same way that we choose to respect the Office of the Presidency, rather than the person occupying it.

There was my answer. The principles of Donald Trump as the Republican nominee align most closely with the principles by which I live my life. This includes his plans to cut the Affordable Care Act. I don’t believe it is the government’s job to provide health insurance—and having a disability isn’t the main guiding force in the way I think about how I want my government run. I want the smallest possible federal structure with states and communities allowed to function as they were intended: to care for their own, disabled or not.

I’d already spent the last eight years gritting my teeth and choosing to respect the Office of the Presidency even though the principles of the man occupying the office—his love for big government, his belief that America should apologize at all, his social liberalism that says my convictions shouldn’t guide my business interactions—made me want to poke my eyes out with a dull stick. There was no way I was going to do anything that would remotely allow a similar scenario for another four or eight years.

When the time came, I happily voted for Trump and Mike Pence. I have no regrets. I did what I had to do to reduce the chances of Hillary Clinton becoming the next President and furthering the practices and policies that have so damaged our republic over the last eight years. Fortunately, we instead have an opportunity to chart a whole new wonderful direction for all Americans. Principles matter. I voted for the policies I believe are best for all Americans, including those with disabilities: limited government, three equal branches that include a non-activist Supreme Court and laws that protect innocent life from conception until natural death. 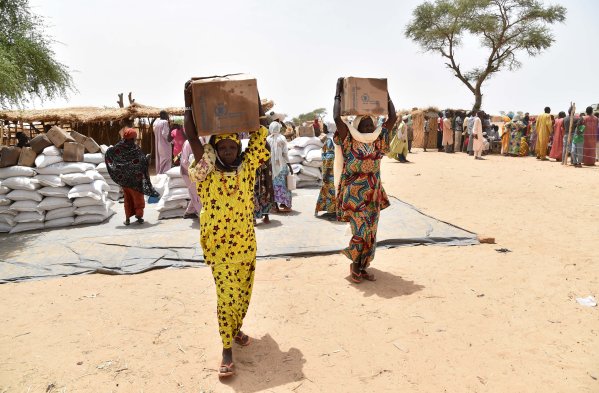 How We Can Kill Terrorism With Kindness
Next Up: Editor's Pick