Scientists Have Figured Out Why Big Hurricanes Keep Missing the U.S.

Palm trees bend in the winds of Hurricane Wilma as the storm makes landfall in Plantation, Florida on Oct. 24, 2005. Wilma was the last major hurricane to make landfall in the U.S.
Bloomberg—Bloomberg via Getty Images
By Justin Worland

Scientists have scratched their heads in recent years as a series of major hurricanes have steered clear of the U.S. Atlantic and Gulf coasts, defying probability.

Now, new research published in the journal Nature explains the unlikely phenomenon as at least in part the result of an occurrence called “protective barriers,” which help keep major hurricanes from making landfall. Cool ocean temperatures combine with strong vertical wind shear, a measure of how quickly wind changes speed or direction, off the Atlantic coast. Faced with those conditions, major hurricanes tend to slow down, according to the research.

The high sea surface temperatures toward the middle of the ocean may increase the total number of hurricanes that form in the region. as climate change shifts global precipitation patterns. Many of those storms hit Caribbean islands hard but leave the U.S. largely unscathed (think of Hurricane Matthew in 2016). The last major hurricane—defined as a Category 3 storm or stronger with sustained winds of at least 111 miles per hour—to hit the U.S. was Hurricane Wilma in 2005.

“When Mother Nature encourages lots of hurricanes to form and strengthen in the tropics, she also tends to slam the door on them if they come near the U.S. coast,” says study author James Kossin, a researcher at the National Oceanic and Atmospheric Administration (NOAA). “This is especially true for major hurricanes that threaten the U.S. coast.”

The phenomenon uncovered in the new research has thus far been good news for the U.S., but the change may not be permanent, Kossin says. Atmospheric patterns in the North Atlantic can take more than a decade to shift, meaning the wind shear and coastal sea surface temperatures that protect the U.S. could easily disappear. Combine that with continued global warming further out in the ocean, and the coast could face many more major hurricanes that make landfall.

Still, many of the variables at play remain unanswered.

“What I found is a natural see-saw mechanism in the climate system,” says Kossin. “It’s going to take some work to figure out how climate change might affect this system.”

Much remains uncertain about the link between climate change and hurricanes, but scientists are now better able to attribute extreme weather events to climate change than they have been before. Droughts and flooding in particular have been linked to man-made global warming. 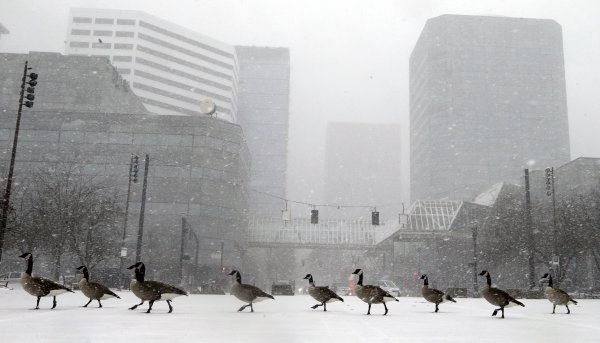 It’s About to Get Really Cold in the U.S.
Next Up: Editor's Pick