Where Memes Could Kill: Indonesia's Worsening Problem of Fake News

Muslims use smartphones as they rest after attending Friday prayers at the Istiqlal Mosque on Sept. 30, 2016, in Jakarta
Tomohiro Ohsumi—Getty Images
By Yenni Kwok

In late November, Indonesian social-media activist Ulin Yusron found himself depicted in a meme. The image, which went viral, falsely portrayed the long-haired male journalist as Amalia Ayuningtyas — a female election volunteer for the governor of Jakarta. The photo, the text claimed, was of Amalia immodestly casting off her usual hijab. It asked: “Where’s the Veil??”

Jakarta’s Christian and ethnically Chinese governor — Basuki Tjahaja Purnama, popularly known as Ahok — is a target for hard-line Muslims, who have successfully pressured the authorities to put him on trial for blasphemy. It is not surprising that memes are being produced that seek to depict the Muslim volunteers in his camp as irreligious and profane.

“When I first saw it, I was able to laugh,” Ulin tells TIME about the photo collage. “But later on, it became so troublesome because there were people who believed it … [The meme] was around for quite a while, and I became tired of explaining it.”

Hoaxes like this, and fake news items in general, have become a massive problem in Indonesia in recent months, coinciding with the hotly contested Jakarta gubernatorial election campaign. To be sure, the sharing of fake news on social media has contributed to political tension in many countries — by one estimate, it generated more social-media engagement than real news during the U.S. presidential election in November — but in Indonesia, with its recent incidences of domestic terrorism, and its long and bloody history of anticommunist, anti-Christian and anti-Chinese pogroms, inflaming ethnic and political tensions is potentially deadly.

President Joko “Jokowi” Widodo, seen as a Muslim moderate, has vowed to crack down, telling a Cabinet meeting that fake news was nothing short of an attempt to destabilize his government. “Slander, hatred and rude words on social media are increasingly troubling people,” Jokowi tweeted on Dec. 29. “We need determined and tough law enforcement.”

The problem first drew significant attention during Indonesia’s 2014 presidential election, in which Jokowi — Ahok’s predecessor as Jakarta’s top official — was a candidate. During electioneering, Jokowi was the constant target of a smear campaign that falsely claimed he was, among other things, the child of Indonesian Communist Party members, of Chinese descent, and a Christian. (He was forced to make his marriage certificate public to quell the rumors.)

Now, the creators of fake news are targeting Ahok, who was deputy governor of Indonesia’s sprawling capital under Jokowi. Ahok succeeded his boss in the governorship and, backed by Jokowi’s party, is now seeking his own mandate in the gubernatorial election next year, competing with two other rivals, including former President Susilo Bambang Yudhoyono’s son. Ahok’s candidacy is opposed by hard-liners who, insisting that Indonesia’s top jobs be filled Muslims only, want to quash any chances Ahok may have of following Jokowi into the national arena.

An edited video and transcript of a campaign speech Ahok made in September, uploaded onto Facebook, went viral and led to ultra-conservative Muslims accusing him of denigrating the Quran. (Ahok suggested in the speech that hard-liners who cited a Quranic verse to support their position that non-Muslims shouldn’t hold high office were misleading voters. His exact words were: “Ladies and gentlemen, you don’t have to vote for me — because you’ve been lied to by those using [the Quran’s] Surah al-Maidah verse 51.”)

Three massive demonstrations resulted, bringing tens of thousands of people to the streets of Jakarta, demanding that Ahok be jailed. He was subsequently put in the dock.

Ahok’s Chinese ethnicity is the target of much of Indonesia’s false news — highly disturbing in a country where tens of thousands of Chinese have lost their lives in pogroms dating back to Dutch colonial rule. There are false rumors of 10 million mainland Chinese workers swamping Indonesia (which Jokowi has rebuffed, saying that “10 million is the number of Chinese tourists we hope will come”). Others claim that the design of Indonesia’s new monetary notes resembles Chinese currency — or that Ahok’s free HPV vaccine program could make girls infertile, and is, therefore, part of a Chinese conspiracy to diminish the Indonesian population. Hoaxers also claimed that the commander of the armed forces, General Gatot Nurmantyo, has warned that “communist China has started to meddle in this country.” Both the Indonesian military and the general have denied he ever made such a statement.

At the same time, “Anti-Chinese sentiment isn’t independent of its own. It is part of a larger network,” says the social-media activist Ulin, who is a supporter of Ahok. He says that fake news is also whipping up anticommunist and anti-Shi‘ite feelings. “All of this is to heighten anti-Ahok sentiment while at the same time de-legitimizing Jokowi.”

“Hoax news has been a daily phenomenon in Indonesia,” says Titi Anggraini, executive director of the Association for Elections and Democracy, a Jakarta-based elections watchdog that is also known as Perludem in Indonesian. But, “the spread of hoax news intensified during the 2014 presidential election and is intensifying in [the run-up to] the 2017 Jakarta gubernatorial election.”

The government, watchdog groups and even religious organizations have taken steps to stem its spread. The Communications Ministry on Wednesday blocked 11 websites, mostly for spreading hatred and misinformation, following a similar step in November. Fact-check sites, apps and Facebook pages, run by activists and volunteers, have sprung up to set the record straight. Nahdlatul Ulama, the biggest Islamic mass organization in Indonesia, has kicked off an anti-fake-news campaign called #TurnBackHoax, while Muhammadiyah, the second biggest Islamic organization, has declared that spreading hoax news is tantamount to a sin. The Press Council has also said it will be verifying trusted media outlets.

Such actions are “important to make things right and to teach a lesson” to offenders, Titi tells TIME. But, she adds, “The legal process, especially criminal punishment, is really ultimum remidium [the last resort]” — and calls for digital literacy education. She also wants guarantees that law enforcement will respect freedom of expression. But that is no easy balance to strike in Indonesia’s tense political atmosphere. 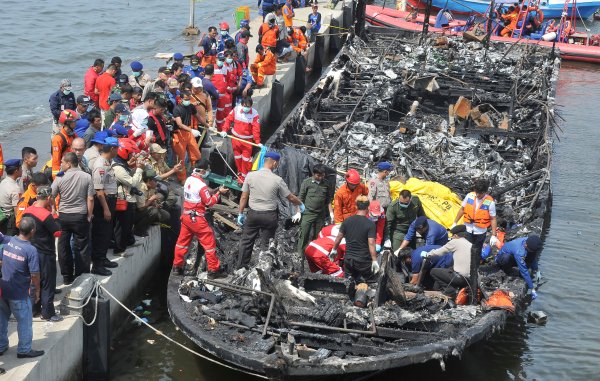