Mariah Carey and 5 of the Most Awkward Lip Sync Snafus

Mariah Carey caught plenty of flak for her train-wreck New Year’s Eve performance on Saturday night, when an as-yet-unexplained technical difficulty led her to skip singing an entire song before partially lip syncing another. At one point, she lowered the microphone while the vocals continued.

“Unfortunately there was nothing she could do to continue with the performance given the circumstances,” her spokesperson said on Sunday. Carey tried to take the mishaps in stride, tweeting after the performance that “sh-t happens.” After all, Carey’s was far from the worst lip-sync-related snafu in TV history. Here are some of the most awkward mishaps on record:

The R&B duo were found to be lip-syncing in a live MTV performance when their track started skipping and repeating the same phrase over and over. Though they won a Grammy for the album Girl You Know It’s True, it later turned out they hadn’t recorded their own vocals, and they ended up returning the prize.

The “Pieces of Me” singer looked startled by her own band’s playing while performing on Saturday Night Live in 2004, and her reaction while the vocals rolled made it clear she had been planning to lip sync the track. Instead of carrying on, she performed a strange jig while the music continued, then eventually left the stage. She blamed her band for playing “the wrong song” at the end of the show.

The rapper blamed a lack of concentration for his inability to mouth along the words to his track “Amusement Park.” “When I prepared the performance, we went through the run-through and it just went totally different from what I actually got the chance to do,” he said.

The child singer captured hearts singing “Ode to the Motherland” at the Beijing Olympics opening ceremony, but it later emerged that Yang Peiyi, another little girl who officials found to be less photogenic, had actually provided the vocals. “The reason was for the national interest,” explained the ceremony’s general music designer. “The child on camera should be flawless in image, internal feeling and expression.”

Beyoncé stirred up a hubbub at President Obama’s second inauguration in 2013 when she was found to have lip synced the national anthem. “I practice until my feet bleed and I did not have time to rehearse with the orchestra. Due to no proper sound check, I did not feel comfortable taking a risk,” she later said. She performed the song impromptu at a press conference to prove she had the singing chops to pull it off and asked, “Any questions?” 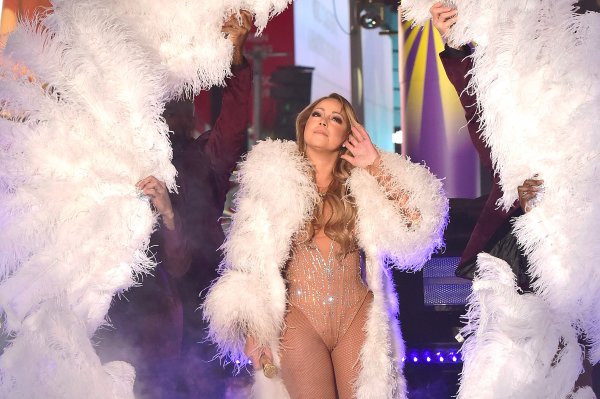 Mariah Carey Had Some New Year's Eve Trouble
Next Up: Editor's Pick