US First Lady Michelle Obama speaks following a screening of the movie, "Hidden Figures," in the Eisenhower Executive Office Building adjacent to the White House in Washington, DC on December 15, 2016.
SAUL LOEB—AFP/Getty Images
By Mahita Gajanan

An Arkansas high school teacher has been accused of making racist remarks about President Obama and first lady Michelle Obama on Facebook.

Trent Bennett, a science teacher at Malvern High School, allegedly called Obama a “spider monkey,” and referred to Michelle Obama as the “first chimp,” according to KATV, an ABC affiliate that cited screen shots of the Facebook posts.

“Michelle Obummer … America’s First Chimp,” Bennett allegedly wrote in a post that is no longer visible.

The Malvern School District said it was investigating Bennett regarding the posts.

“Over the Holiday weekend the District became aware of what appears to be a social media post by a district employee on his personal account that was inappropriate, insensitive, and used racially charged rhetoric,” the district said in a Facebook statement. “In no way are these posts reflective of the District. The District is currently investigating the matter and due to privacy laws and regulations are not able to comment specifically on any details related to the investigation. The District takes this kind of activity very seriously and the appropriate measures will be taken once the investigation is complete.”

Obama has repeatedly faced racist remarks during her time as first lady. A West Virginia nonprofit director who compared her to an ape in a Facebook post last month lost her job over the comment. 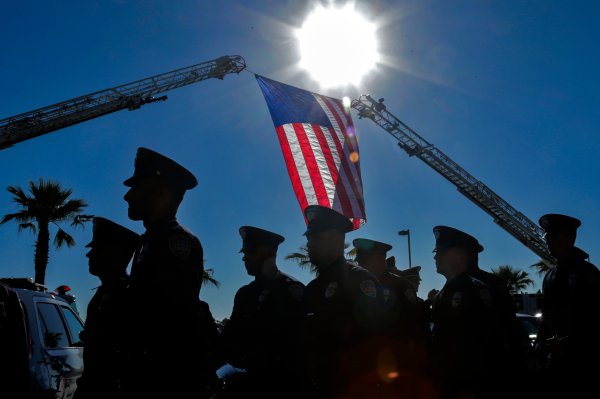 Number of U.S. Police Officers Killed on Duty Rises
Next Up: Editor's Pick