How Debbie Reynolds Recalled Her Hollywood Career: "My Life is Golden"

EW’s Lynette Rice recalls her 2015 meeting with legendary actress Debbie Reynolds, who died Wednesday at the age of 84, one day after her daughter Carrie Fisher died at age 60.

There was no greater thrill than to be ordered around by Debbie Reynolds.

In preparation for the Life Achievement honor that Debbie would receive from the Screen Actors Guild in 2015, I had the privilege of interviewing the then-83-year-old actress about her extraordinary life and career. I begged for the chance, actually; when a former PEOPLE colleague lamented about having too much on her plate, I pleaded for the chance to do the interview myself for EW’s sister publication, and I couldn’t believe my luck. I was going to meet Molly Brown.

Debbie was very specific about how the interview should occur. I would conduct it at her cottage, another windfall since it meant seeing where her daughter Carrie lived, too. The women occupied a small compound off a canyon road near Beverly Hills that was hidden behind a wooden fence decorated with eclectic bric-a-brac. I was told to drive my car up a tree-lined easement and park it by an open garage, where a very large cardboard image of Carrie as Princess Leia could be seen leaning against the far wall.

Debbie met me at her door with her shaggy dog, Dwight (a very good friend of Carrie’s dog Gary, I was told). I had just missed Carrie; she had come for a visit but quickly retreated because of a nasty cold. After stealing a glance of Debbie’s massive portrait on the wall, I headed for a comfortable spot on a couch near a lamp before the legend cut me off. That was her spot, Debbie informed me. I was to sit in the nearby chair and drink my tea.

My job was to take Debbie through a series of pictures from her life and ask her to share anecdotes. For the most part, her memory was extraordinary; she remembered vividly how talent scouts discovered her while competing in the Miss Burbank pageant in her teens (“I didn’t wear shoes, and I was amused by the whole evening”) and the time she met the “wonderful” Spencer Tracy while on the MGM lot — though she had no idea why she did it while wearing a Girl Scout uniform. “I was very proud of that uniform and still am. I had 47 badges when I visited that day… more than anybody!”

She spoke candidly about always wearing wigs (“Doing your own hair — why bother?”) and the pains she took as a young actress to make her waist look slender.

“I wanted to have no ribs,” she recalled. “I wore what was called a waist-nipper in those days. My mother made it. It’s a piece of rubber band I wore around to hold my rib cage in. I don’t know why I always loved that. I guess I was a glutton for punishment. I think I was born one of those people who loved swords and fought in armor.”

Next up: a picture of her and Frank Sinatra, whom she met on the set of The Tender Trap. “He’s a very sweet man. He was very good to me and gave me some very good advice that I did not listen to. He said, ‘Sweetie…’ — he called me sweetie — ‘don’t marry Eddie.’ He said, ‘You shouldn’t get married to a singer. We’re not faithful. It’s ridiculous for you to take this on.’”

That led us to the most fascinating photo in my stack — the one of her, Eddie, and Elizabeth Taylor at the Tropicana Hotel in 1958. (Debbie married Eddie three years earlier). Elizabeth was married to Mike Todd at the time and, like Debbie, was in her 20s. “She had been a star forever,” recalled Debbie, who had attended school with Liz while they were both at MGM. “I was in awe of going to school with her. And if you weren’t, you were lying or blind.”

Though her notorious affair with Eddie broke up his marriage to Debbie, Liz made amends with her old school chum years later. “We were friends until her death,” Debbie told me. “But we had that lapse of time when she took Eddie to live with her because she liked him too.”

Finally, a happy picture of her daughter Carrie and her brother Todd as toddlers. “Aren’t they beautiful?” she said, gazing at the old press photo. “I always loved to put little outfits together for them. They were raised on the MGM backlot. I was very blessed, very blessed to have these children. I was just lucky.”

Time was up; another reporter was scheduled to interview Debbie about her Life Achievement award. It tickled the actress that she was winning such an honor. “Every moment adds up to a life, and that’s why I am here with you for an achievement award that they say I’ve earned,” said Debbie, smiling. “The golden era of Hollywood. Fortunately, that’s really my life. My life is golden.” 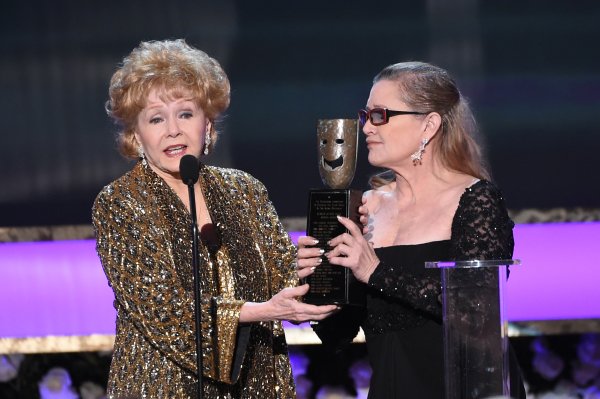 Watch Carrie Fisher’s Touching Tribute to Her Mom at the SAG Awards
Next Up: Editor's Pick