Debbie Reynolds died Wednesday at the age of 84, one day after the death of her daughter, Carrie Fisher. The bond between mother and daughter, members of a Hollywood dynasty and both successful actresses in their own right, was on display back in 2015 when Fisher presented her mother with the Life Achievement honor at the Screen Actors Guild Awards.

“Not only was my grandmother her mother, she is the grandmother to my alleged daughter,” Fisher began her introduction. “It also turns out that we’re neighbors.”

She continued, “[Reynolds] has been more than a mother to me, not much, but definitely more. She’s been an unsolicited stylist, interior decorator, and marriage counselor,” Fisher said. “Admittedly, I found it difficult to share my mother with her adoring fans, who treated her like she was part of their family. She has led two lives, public and private, sometimes concurrently, sometimes not.”

After taking the stage, Reynolds playfully joked back with her daughter with a story referencing her most famous film, 1952’s Singin’ in the Rain. “I had a wonderful hairdo in the film,” Reynolds said. “I had a big bun. So I warned my daughter Carrie — who just got a part as Princess Leia in Star Wars — I said, ‘Be careful of any weird hairdos.’ So luckily George [Lucas] gave her two buns.”

Reynolds told the crowd that Singin’ in the Rain was her all-time favorite role, and also brought up her Oscar-nominated turn in The Unsinkable Molly Brown. “In that movie, I got to sing a wonderful song ‘I Ain’t Down Yet,’” she said. “Well, I ain’t.”

Watch Fisher and Reynolds at the 2015 SAG Awards above, beginning at the 1:34 mark.

This article first appeared on EW.com. 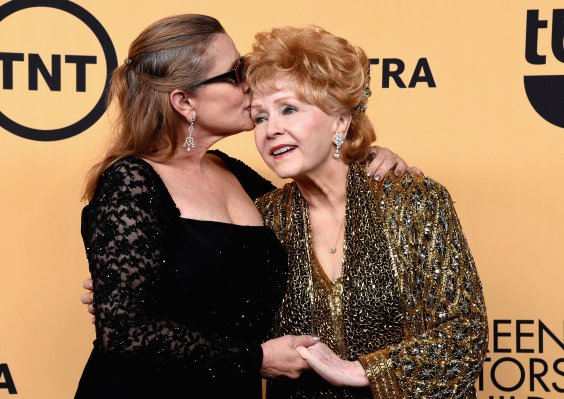 'A Trailblazer and a Hero': Tributes to Debbie Reynolds
Next Up: Editor's Pick