US President-elect Donald Trump looks on while speaking during a 'Thank You Tour 2016' rally in Orlando, Florida, on Dec. 16, 2016.
Jim Watson—AFP/Getty Images
By Zeke J Miller

Donald Trump called for a nuclear arms build-up Thursday, a day after meeting with top Pentagon brass and Russian President Vladimir Putin made his own speech calling for his country to strengthen its arsenal.

In a tweet sent while on vacation at his Mar-a-Lago estate, the president-elect said, “The United States must greatly strengthen and expand its nuclear capability until such time as the world comes to its senses regarding nukes.” Trump met with eight generals and admirals Wednesday as part of a briefing on U.S. military procurement needs, including Lt. Gen. Jack Weinstein, the Air Force Deputy Chief of Staff for Strategic Deterrence and Nuclear Integration.

It is unclear whether Trump’s comments reflect a desire to change U.S. policy, or a reflection of his support for existing U.S. plans to expend nearly $1 trillion over the coming decade on modernizing and upgrading the nation’s aging nuclear arsenal and delivery systems.

Trump’s tweet, below, comes hours after Putin delivered a speech to his Defense Ministry Board advocating an upgrade of his country’s weapons systems.

Putin also pointed to advances in U.S. missile defense technology and ongoing upgrades to American warheads. “These actions create additional risk for Russia, and we cannot fail to respond to them,” he said.

At very least, Trump’s comment marks a rhetorical shift from President Barack Obama, who publicly espoused a desire for a nuclear-weapons-free world and entered into a New START (Strategic Arms Reduction Treaty) with Russia in 2010 to reduce the number of deployed warheads. But to win support for the treaty Obama had to commit to shift more resources toward modernizing the existing arsenal.

In a press conference in April after a nuclear security summit in Washington, Obama warned that balance must be sought to prevent a return to a Cold War-era nuclear arms race. “We do have to guard against, in the interim, ramping up new and more deadly and more effective systems that end up leading to a whole new escalation of the arms race,” he said.

Trump has called for strengthening ties with the Russian strongman, and has rejected the U.S. intelligence community’s assessment that Russia was behind hacks into U.S. political organizations during the 2016 campaign.

According to Trump spokesman Jason Miller, Trump received the presidential daily briefing Thursday for the second time in as many days. 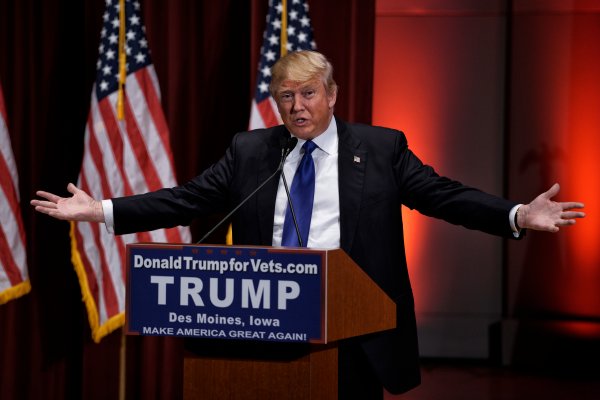 Donald Trump Says He Still Wants to 'Drain the Swamp'
Next Up: Editor's Pick