Police officers stand guard at a residential neighborhood in Tangerang, outside Jakarta, where police conducted a raid on a house used by suspected militants, on Dec. 21, 2016
Tatan Syuflana—AP
By Yenni Kwok

Members of Indonesia’s counterterrorism squad have shot dead three suspected terrorists and arrested one in South Tangerang, on the outskirts of Jakarta.

The three, who were armed with bombs, were killed during a raid in a rented house, Jakarta police chief Mochamad Iriawan told local media on Wednesday morning, shortly after the shootout. Police also found “active bombs” on the scene.

According to the authorities, the four suspects were allegedly planning to attack a police post near a hospital in Tangerang at the end of the year. “They planned to stab police officers at the post, and when there were more officers and members of the public arriving, there would be a suicide bombing attack,” said spokesman Raden Prabowo Argo Yuwono.

The suspected terrorists in Tangerang were believed to have links with 14 alleged jihadists who have been arrested in the past 10 days, including a female suicide bomber and three female accomplices; they were accused of plotting to bomb the presidential palace. The police named Bahrun Naim, an Indonesian ISIS jihadist in the Middle East, as a mastermind behind the plan to attack the palace, as well as other terrorist plots, including an attack that killed eight in Jakarta in January.

Two other terrorist suspects were arrested in two separate provinces in Sumatra on Wednesday, both of them are believed to have links with Bahrun.

Although Indonesia’s counterterrorism operations have had some success against jihadist groups, the Muslim-majority country remains a target of terrorist attacks. This year, Islamist militants have targeted houses of worship and police personnel in different cities. On Tuesday, police in Bali meanwhile safely detonated a low-explosive backpack bomb found in the popular tourist district of Ubud. 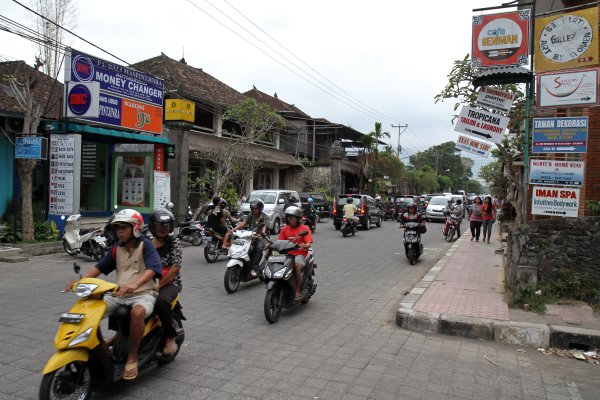