Donald Trump and the Republicans Have No Mandate

The time for mourning is over, Democrats. We’ve had over a month.

No, Election Night wasn’t fun. Trust me, I spent two years on the campaign that lost; I share the grief and responsibility. Donald Trump is the next President, and a reasonable amount of bedwetting is warranted. But, it should be fear for our country—not fear that we lost the American people along the way. We didn’t.

For a moment, imagine you didn’t fully expect Hillary Clinton to win. It’s the morning after the election. Your favorite morning show host tells you this:

Now how would you feel? It doesn’t mean we won the White House and still doesn’t mean we did everything right. Far from it. There is a lot of justifiable blame and needed introspection. But it does mean we still represent the country and that’s a trust we can keep if we work at it.

Now imagine that same news cast reminded you that there hasn’t been a Democrat elected to succeed a two-term Democratic President since 1836. And that there was a late-breaking intrusion in the race from the FBI Director, as well as successful foreign espionage by the Russian government, according to the CIA, to influence the election. I don’t bring these facts up as excuses. I say them to show that this election wasn’t a popular rejection of Democrats at large or even Hillary Clinton in particular. Nor was it an affirmation of Republicans and Donald Trump.

But unfortunately, Democrats don’t feel the way described above. Why? Because we expected better. We believed the hype—both the media’s and our own—that we would win. I’m not blaming anyone else. I believed it, too. But just because you epically lost an expectations game doesn’t mean you epically lost an election.

Let’s not fall victim to what Republicans are trying to do. They want us to forget what actually happened. That’s how they will build the perception of support for an agenda that voters rejected. President-elect Trump has already started to repeatedly claim a mandate for his agenda and a landslide for his win. Neither are true.

Republicans have the right to govern but they don’t have a mandate for their policies. If we don’t start to make that point, each and every day, then we will wake up in a few months and find out Republicans have taken the country in a new direction. If we don’t fight back against unfounded claims of a mandate, or navel-gazing that this election was a total rejection of our party, we will be wondering why the Republican agenda has gained momentum in just a few short months.

I accept my role in what went wrong. Everyone should. Nothing written here is meant to deny that. We lost when we should have won. And it’s terrible. We should spend time analyzing and thinking and strategizing. We should figure out how to reconnect with voters we struggle to reach while energizing the coalition we have built. We should improve our infrastructure and be ready for the next one.

But we should do this because it’s important, not because we think everything we did and everything we stood for is broken. Right now it feels like Democrats around the country are attending a funeral or a wake. The problem is that we’re mourning a patient who is very much still alive. 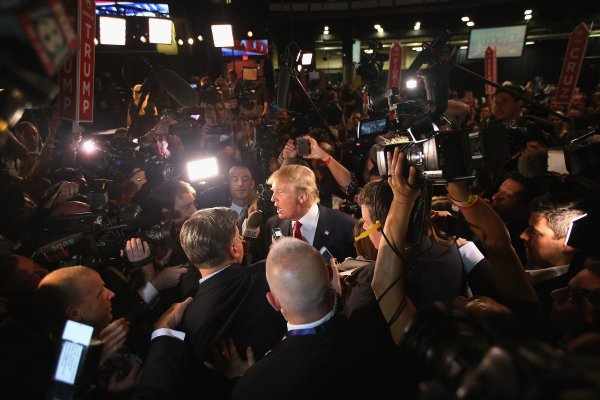 Donald Trump Wouldn't Be the First President to Rethink Press Briefings
Next Up: Editor's Pick