'It Happened So Fast:' Eyewitnesses Speak of Horror of Berlin Christmas Crash

Ambulances line the streets as rescue workers tend to the area after a lorry truck plowed through a Christmas market on December 19, 2016 in Berlin, Germany.
Sean Gallup—Getty Images
By Paul Carrel / Reuters

BERLIN, (Reuters) – The Berlin evening air was cool, the mulled wine warm and festive spirits high. Then, suddenly, chaos: A truck plowed into the Christmas market, making no obvious attempt to stop, and smashing revelers in its path.

“It happened so fast there was nothing we could do to stop it,” said Mike Fox, a tourist from Birmingham, England, who had just enjoyed a mug of mulled wine with his girlfriend at the market in the heart of former West Berlin.

“It definitely looked deliberate,” he told reporters of the incident, which police said took place at around 8 p.m. local time (1900 GMT).

“It was careening in, bashing in to the stalls,” he said of the large, black, Scania truck that eventually ground to a halt, Christmas decorations protruding from its smashed windscreen.

Police said the truck killed 12 people and injured 48 others after plowing into the Christmas market at the foot of the Gedaechtniskirche, or memorial church, built in 1891-95, which was left a ruin after it was damaged in World War Two bombing raids as a monument to peace and reconciliation.

“I spoke to two people who were lying on the floor with broken limbs, but they were going to be OK,” said Fox, who said the truck missed him by about three metres (10 feet) and kept going.

“I saw one guy being dragged away with blood on his face. I helped several other people lift the side of one of the stalls up so that they could pull two other people from underneath.”

Rescue workers gather with stretchers outside a tent in the area after a lorry plowed through a Christmas market on December 19, 2016 in Berlin, Germany.
Sean Gallup—Getty Images

Emma Rushton, another tourist visiting Berlin, said she had a near escape too as the truck tore through the market, ripping down Christmas lights.

“It was about 8, 10 feet in front of us, and had we left two minutes earlier we would have been right in the path of it,” she told the BBC.

“It was probably doing about 40 miles per hour (65 km per hour). It showed no signs of slowing down,” she said. “It wasn’t an accident. It didn’t feel like an accident.”

Interior Minister Thomas de Maiziere said the circumstances of the crash were still unclear, adding: “I don’t want to use the word ‘attack’ yet although a lot points to that.”

A local German woman, who had made a habit of stopping by the Christmas market on the way home from work, said she was lucky to arrive after the carnage: “I am here almost every night. Only today I was on late shift.” 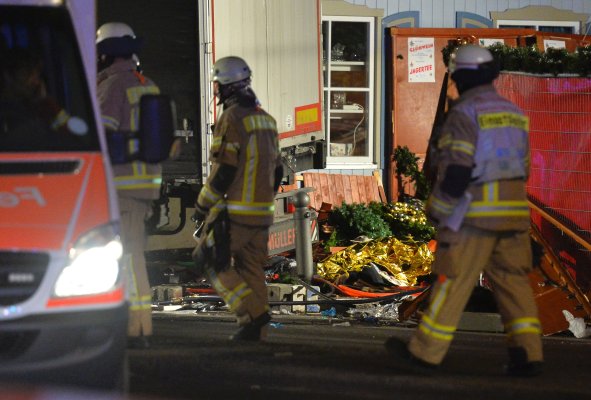 What to Know About the Berlin Christmas Market Attack
Next Up: Editor's Pick