Berlin police said Tuesday that the initial suspect detained after the truck attack on a crowded Berlin Christmas market on Monday evening has been released due to insufficient evidence, suggesting the real culprit is still at large.

The vehicle plowed into crowds of people at the Breitscheidplatz market, killing 12 people and wounding 48, some of them critically, in what German Chancellor Angela Merkel said is assumed to be a terror attack.

A man initially thought to be the driver was arrested near the scene, Winfrid Wenzel, the chief spokesman for the Berlin police department, told TIME on Monday night. The following afternoon local time, Interior Minister Thomas de Maizieres confirmed media reports that the suspect was a Pakistani asylum seeker, 23, who had arrived in Germany recently. However, the suspect denied involvement in the attack and German prosecutors later released him, saying they were unable to prove that he was in the truck’s cab during the attack, the Associated Press reported.

In a statement Tuesday morning, Merkel said she was “horrified, shaken and deeply sad” about the attack on the market, saying police were working on the assumption that it was a terrorist attack. “This unspeakable event will be as severely punished as the law will allow,” she added, saying she would visit the site later on Tuesday. “We will find the strength to continue living life as we want to live it in Germany – in freedom, openness and together.”

In her statement, Merkel — who has championed open borders for asylum-seekers — said it would be “sickening” if the attacker turned out to be a refugee.

The method of the carnage drew immediate comparisons to the ISIS-inspired terrorist attack that struck in Nice, France, on July 14. During that city’s celebrations of Bastille Day, Mohamed Lahouaiej-Bouhlel, a Tunisian resident of France, drove a massive truck through a crowd of revelers gathered on a beachside promenade. That attack left 86 people dead and more than 400 wounded.

It also prompted the police force in Berlin to work with their French colleagues in recent months to prevent a similar incident from taking place in the German capital, Wenzel told TIME. “We did have contacts with them after Nice,” he said, referring to French authorities. “We worked with them.”

But those efforts now seem tragically insufficient. Among the victims at the Christmas market on Monday, Wenzel said, there was likely a mix of tourists and locals who had been enjoying a favorite holiday tradition in Germany, shopping for gifts and drinking mulled wine at outdoor stalls decked out in colored lights.

Security stands guard after a lorry plowed through a Christmas market on Dec. 19, 2016 in Berlin
Sean Gallup—Getty Images

“It’s a few days before Christmas,” said the spokesman, glancing back at the empty truck, which was surrounded by ambulances and police vehicles. “So it’s very clear that we have a mix of tourists and residents of the city here.”

Behind him on Budapester Street, near the city’s zoo and in the middle of a bustling district of shops, movie theaters and night clubs, uniformed officers were climbing into the back of the truck. According to Wenzel, it had careened at high speed through the entire length of the outdoor market, a distance of about 260 ft., before coming to a stop on Budapester Street, a Christmas tree crowned with a large golden star sticking out from under it.

Witnesses said they saw a man climb out of the driver’s cabin and attempt to flee the scene on foot, but Wenzel said witnesses lost track of that man. A second man also climbed out of the truck, but he died on the scene. He was later identified as Polish, Wenzel said. 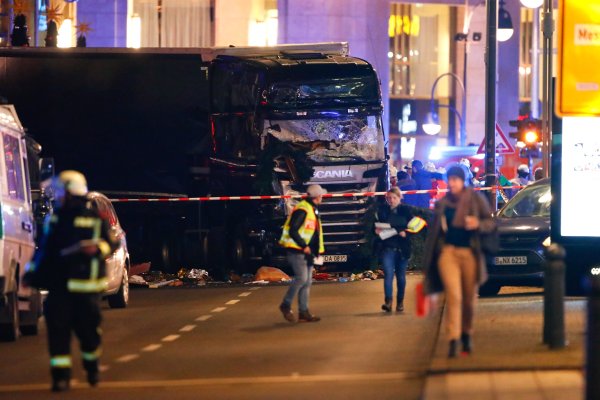 9 Killed by Truck in Berlin
Next Up: Editor's Pick