Who Betrayed Anne Frank? A New Study Suggests Nobody Did

For decades, historians have debated who betrayed Anne Frank and her family.

After spending two years eluding Nazi capture while in hiding in Amsterdam, the Frank family was discovered on Aug. 4, 1944, and promptly deported from the Netherlands to concentration camps. Years later, after Anne Frank became famous for her diary, readers wondered what had gone wrong. A long-held theory proposed that a new employee at her father’s business, Willem van Maaren, tipped off the Nazis. But despite suspicions, there was no conclusive evidence van Maaren betrayed the family.

Now, about 72 years later, the world may have an answer to the mystery: Maybe nobody betrayed them at all.

Last week, the Anne Frank House museum in Amsterdam released a study that suggests that Anne Frank and the seven others hiding with her were discovered by chance.

According to the researchers, the German “Sicherheitsdienst” police who discovered the family usually investigated cases involving cash and securities, not Jews in hiding. On Aug. 4, 1944, they went to investigate 263 Prinsengracht—the same building where Anne and her family were hiding—after receiving tips of fraudulent food-ration cards and illegal employment happening there. When they came to raid the building, they unexpectedly discovered Anne and the others.

The research is based on Frank’s diary entries from March 1944—entries that researchers say have not been used as a source until now. Her writing created a trail to judicial documents from other parts of the Netherlands, resulting in the latest theory.

“Despite decades of research, betrayal as a point of departure has delivered nothing conclusive,” Ronald Leopold, Executive Director of the Anne Frank House museum, said in statement. “The new investigation does not refute the possibility that the people in hiding were betrayed, but illustrates that other scenarios should also be considered.”

Anne, who is famous for documenting her time in the “Secret Annex” in her renowned diary, died of typhus in the spring of 1945 at the Bergen-Belsen concentration camp in Germany. She was 15 at the time of her death. Out of the seven others who hid with her, her father, Otto Frank, was the only one who survived the Holocaust. 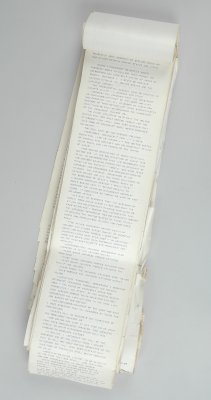 See an Original 1941 Transcript of FDR's Pearl Harbor Speech
Next Up: Editor's Pick