The effects of Russia’s hacking of Democratic emails before the U.S. presidential election didn’t end on Nov. 8. In the weeks since, the fallout on American democracy has continued, revealing splits in Congress and tainting Donald Trump’s transition effort.

President Barack Obama has ordered the intelligence community to produce a full review of Russia’s malicious cyberactivity for declassification and publication before Inauguration Day. The point, says one source familiar with the review, is not just to lay out what happened but to establish a record before Trump takes over command of the national-security agencies. Trump has so far refused to accept evidence that Russia was behind the attacks, and has suggested the U.S. intelligence community’s conclusions are politically motivated.

Trump faces trouble from his own party on Capitol Hill, as well, where Republicans have long been the most aggressive opponents of the regime of Russian President Vladimir Putin. South Carolina Republican Senator Lindsey Graham said he would vote against Trump’s choice to head the State Department, ExxonMobil CEO Rex Tillerson, unless he supports sanctions against Russia in retaliation for the hacks. Republican Senator John McCain intends to hold hearings on Russian cyberactivity in 2017.

The fallout extends beyond Russia. Some U.S. intelligence officials have concluded North Korean dictator Kim Jong Un is on his way to being able mount a nuclear weapon atop a missile that can reach the U.S. Trump may need to rally support at home and abroad for action against Pyongyang, and will need to cite the work of the intelligence community to do so. His attacks on the credibility of America’s spies only make that harder.

And then there is China. Trump says he may impose trade tariffs on China for its cybertheft of trade secrets. But he will find that the doubts he has raised about U.S. intelligence could make it harder to argue that Chinese hacks have robbed American industry. Conclusive fingerprints are rarely left in cybercrime.

Trump may even find himself vulnerable. Russia may have hacked him and his campaign. If he breaks with Putin on one of the many potential policy disagreements between the two leaders he may find himself the victim of leaks he can’t credibly blame on Russia, thanks to his current attacks on the CIA. And the top Democrat on the House Intelligence Committee, California’s Adam Schiff, says he is worried Trump could be vulnerable to coercion, given the mystery surrounding Trump’s foreign business. “We simply don’t know what economic interests he has in Russia or Russia’s neighbors,” he says. 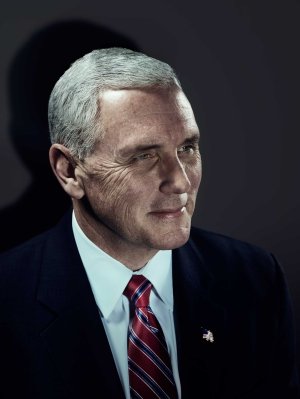 Mike Pence Is No Ordinary Wingman
Next Up: Editor's Pick