Domestic Helpers in Singapore Have Been Investigated for Suspected Islamic Radicalism

Singaporean authorities say they have investigated five foreign domestic workers for suspected radicalism over the past two years, adding to heightening fears that ISIS and affiliated groups could be expanding their reach in Southeast Asia.

The women were among 70 foreign suspects under investigation, Channel News Asia (CNA) reports. Most of the suspects were reportedly radicalized by propaganda spread on social media, and some were said to have radicalized others, as well.

“None of them had any plans to carry out acts of violence in Singapore at the time they were investigated, but as they were in various stages of radicalism, their presence posed a security concern for Singapore,” CNA said, citing a statement released by the city-state’s Ministry of Home Affairs. The suspects were later deported.

The announcement follows reports last week that a domestic helper who had worked in Singapore and Taiwan was successfully radicalized by a terrorist cell in Indonesia, and had been convinced to carry out a planned bomb attack on the presidential palace in Jakarta. In that case, the 27-year-old woman reportedly said she was “inspired” by jihadists’ Facebook profiles. She and six accomplices were arrested.

Attempts have also been made to radicalize domestic workers in Hong Kong.

There are an estimated 237,000 foreign domestic workers in Singapore, according to CNA citing recent government statistics — about 17% of the entire workforce. About 125,000 of them are from Indonesia.

An ISIS-operated brigade in Syria called Katibah Nusantara, made up of Malay-speaking militants from Indonesia, Malaysia and the Philippines, has reportedly been trying to expand its appeal in Southeast Asia through propaganda. Other existing militant groups in Southeast Asia have also pledged allegiance to ISIS.

Terrorist attacks in Indonesia and Malaysia in July were blamed on militants with ISIS links. 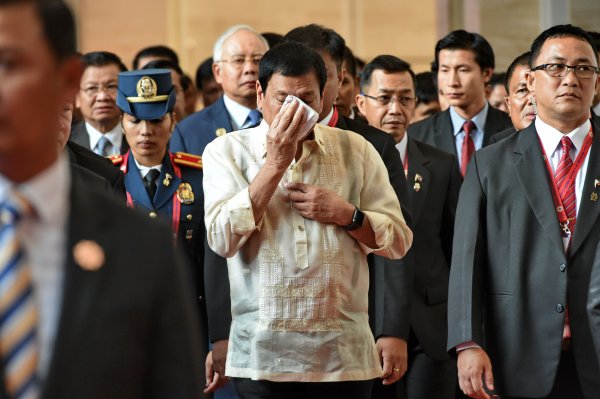 Philippine Lawmakers Want Facts on Duterte Opioid Use
Next Up: Editor's Pick