Faith, boring and virtuous, is the dirge. Doubt is the thing that swings. And the hushed energy of doubt that drives Silence, Martin Scorsese’s radiant exploration of what it means to believe in the grace of God, or of anything.

Silence is most easily categorized as a “religious” movie, and it’s certainly of a piece with Scorsese’s other pictures about belief and spirituality, The Last Temptation of Christ and Kundun, both of which rank among his finest yet also most underappreciated work. But Silence—adapted from Shusaku Endo’s 1966 novel of the same name, about Portuguese Jesuit missionaries facing persecution in 17th century Japan—works on so many levels, and is so hauntingly beautiful to look at, that no one should be turned off by the Jesus angle. Silence is something to see whether you’re certain there’s a God or whether you just believe in sunlight, which covers just about everybody.

Andrew Garfield and Adam Driver play Sebastião Rodrigues and Francisco Garrpe, Jesuit missionaries from Portugal who volunteer, fervently, to travel to Japan, where Christians are being persecuted. They’ve received news that their mentor, Cristóvão Ferreira (Liam Neeson), who had been doing missionary work in the country, has caved in to pressure from the Japanese authorities and apostatized—in other words, disavowed his faith. Might they be able to find him? They pack up their almost nonexistent belongings—Jesuits travel light—and begin their long journey, making a stop in Macau to pick up the rapscallion guide who has been chosen for them, Kichijiro (Yôsuke Kubozuka).

What they find when they reach Japan both defies their expectations and unnerves them: The devout Christian peasants who greet them—people who have been almost literally driven underground for their forbidden faith—can hardly believe this blessing, that they finally have genuine priests in their midst. Rodrigues and Garrpe are stunned by the depth of the locals’ commitment and at first worry that they might not be able to meet these mountainous expectations. But Rodrigues warms to the job fairly quickly; Garrpe is the one whose anxiety never fully dissipates, and whose nerves begin to fray after too many days in the small hut where the two are kept in hiding, unable to venture out during daylight.

One day, after Rodrigues, too, succumbs to cabin fever, the two sneak out to sun themselves on a rock. The scene is a gentle, almost imperceptible dramatic pivot: As they soak up the glory of natural light, they notice two peasants, unknown to them, staring in their direction. Framed by branches, half obscured by swirls of mist, these figures are a mystery, a promise, a warning of suffering to come. The sight of them, ghosts made of flesh and blood, is so visually bewitching that it seems to stop time.

Silence is deeply attuned to the natural world, almost pagan in its fervid depiction of ruggedly gorgeous seashores and quasi-mystical leafy forests, courtesy of cinematographer Rodrigo Prieto (who has worked with Scorsese once before, on The Wolf of Wall Street) and Scorsese’s longtime production designer Dante Ferretti. (The picture was filmed in Taiwan.) But this is also a story told largely with faces, like that of the almost comically villainous Inoue (the marvelous, purring Issei Ogata), who attempts to grind the faithful down with logic, though he really prefer torture. There’s also Kubozuka’s anguished ne’er-do-well Kichijiro, who wears an unblinking mask that combines treachery and innocence in a kind of perverse purity. Kichijiro keeps denouncing Christianity to save his own skin, only to run back to Rodrigues for forgiveness: The turnaround time between betrayal and repentance gets shorter and shorter, becoming a kind of bitter slapstick.

And then there’s Driver, whose searching eyes and noble oblong face and could have been dreamed up by Francisco de Zurburan. The vision of Driver’s Garrpe plunging into the sea, his long cartoon limbs flailing as he strives to save a group of peasants about to be executed for their faith, is one of the film’s most lingering images.

It’s a little strange to think of a film that’s ostensibly about Christianity as one that casts a spell. But anybody who has grown up inhaling the scent of incense during mass—or believing that stabbing a consecrated host with a pencil is the surest path to Hell—understands that Catholicism, in particular, gives off a heady, otherworldly perfume. When Scorsese shows us a group of peasants apostatizing—one by one, they’re led up to a metal plate imprinted with an image of Jesus and exhorted to stomp on it—the sight of their muddy sandaled feet, sullying the sacred, induces a kind of trance like horror. Sections of Silence are difficult to watch for other reasons: Scorsese doesn’t flinch from the grisly suffering of Christian martyrs, and he trusts us to be able to face up to it, too.

Garfield’s dutiful, contemplative Rodrigues faces the most grueling trial of all. But to tell you whether he succeeds or fails would give the whole game away. Besides, the essence of Silence has nothing to do with failure or success. The nature of belief is far too variegated for that. Scorsese has wanted to make a movie out of Endo’s novel since he first read it, in 1989. In the introduction to a recently published edition of the book, he writes, “On the face of it, believing and questioning are antithetical. Yet I believe that they go hand in hand. One nourishes the other.” To that end, Silence makes no clear value judgment between belief and doubt. It’s a movie in the shape of a question mark, which may be the truest sign of the cross. 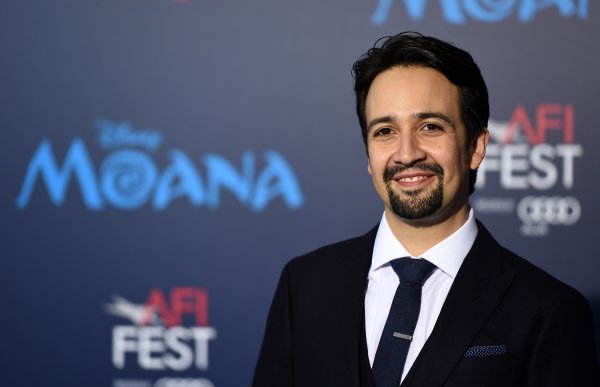 Lin-Manuel Miranda on Art in the Trump Era
Next Up: Editor's Pick