Jim Jarmusch’s Paterson—the director’s thirteenth film and also possibly his finest—is a joyous picture. But it’s also brushed with melancholic shadows that cling. Its jokes are of the gently whirring Wiffle Ball variety. That only adds to the picture’s delicate, haiku-like beauty. Adam Driver plays a bus driver whose job is to navigate the streets of Paterson, N.J. He also happens to be named Paterson, and he’s lived in the city all his life. In the random spare slivers of his day, Paterson, quiet and thoughtful by nature, writes poetry. (His poems, as seen and heard in the film, were written by New York School poet Ron Padgett.) Anything can inspire him: a box of Ohio Blue Tip matches, his sense of the bus he drives pushing through air molecules, scraps of conversation he catches from his passengers. The later don’t directly inform his poetry, but you get the sense they’re a subtle background for everything he thinks about and feels.

At the end of the day, he goes home to his wife, Laura (Golshifteh Farahani, radiating Froot Loopy charm), whom he loves dearly, and to the couple’s crabby bulldog, Marvin (a marvelous animal actor named Nellie, who died shortly after the film was completed), whom he tolerates. Laura is as exuberant as Paterson is quiet. He’s barely stepped through the door before she’s showing off the curtains she’s just made (the couple’s small home is a riot of DIY home decor, mostly in the black-and-white scheme Laura loves), or prattling on about the cupcake business she’s going to start, or articulating her dream of becoming a country-western star. (All she needs to do is buy a guitar. And then learn to play it.) But she adores her husband, and she loves his poetry, too. She urges him to share it with the world, even though he seems mostly to want to keep it only for himself.

Laura dreams big; Paterson is content to go from day-to-day, enjoying his routine of walking down to a local bar each evening to chat with his neighbors. But we can see there’s always some small sadness, or at least a wisp of confusion, tugging at him. Driver is turning out to be one of the finest actors of the moment, an understated star with a great, non-movie-star face. This is a wonderful performance: Driver conveys, with just the subtle flicker of an eye or the gentle curve of a smile, how much he enjoys the life of the city—it’s something he breathes in every day, like air.

Paterson is also a stunning-looking film, even though it’s set, and was filmed, in a city that many may not think of as beautiful. Jarmusch and his cinematographer Frederick Elmes capture this place in all its cracked-sidewalk glory. As Paterson guides his giant boat of a bus through the city’s streets, he passes Rent-a-Centers and Footlockers, places we don’t usually see in movies unless the filmmaker is trying to make a statement about “urban” life, with all the color-line divisions those quotation marks imply. Paterson—the movie and the city—is a place where white people and people of color live together and think nothing of it, even though they may get on one another’s nerves at time, as people in all cities do.

Jarmusch isn’t making a big pronouncement about that, which is just one of the reasons Paterson feels so fresh and unusual. It’s about so many things: the energy that keeps even an economically depressed city’s lifeblood thrumming, the closeness but also the inherent loneliness of couplehood, the way the things we do in our spare time can come to define who we are. It’s about love and poetry and dreams, and about the chance encounter that can close a wound with the magic efficiency of a tiny butterfly bandage. How you pour all of that into one movie is something of a mystery. But then, a good poem is always something of a mystery too. 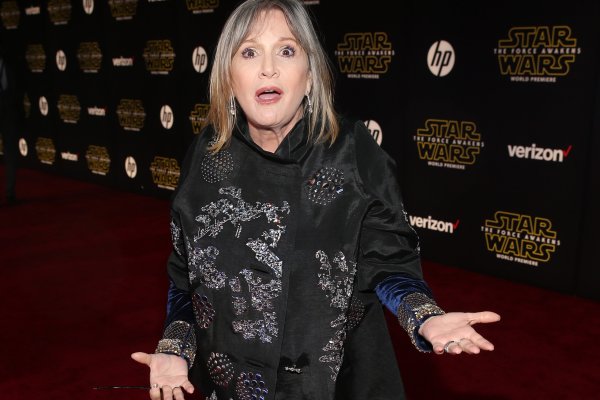 Watch Carrie Fisher in This Cut Scene from The Force Awakens
Next Up: Editor's Pick