Passengers is two-thirds of an amazing movie, a sci-fi romance that gives its heart away too early and doesn’t know what to do with itself after that. That’s a shame, because the deep-seated melancholy of the movie’s first third—and the idyllic, too-good-to-be true romantic bliss that flowers in the second—are rare, delicate qualities in the science fiction we’re getting these days. I’m afraid people will scoff at what they see as the silliness of Passengers even as they spend hours tripping over themselves to make a case for Rogue One as a deep, serious, anti-fascist film. (It is anti-fascist, but only in the most facile, uninteresting ways.)

But if the best science fiction is less about outer space than inner space—about the ways pushing out forces us to confront the most fearful and fragile parts of ourselves—then Passengers at least deserves a chance. The movie opens with a man waking up in a glass pod: Chris Pratt’s Jim is a brawny mechanic who’s one of several thousand Earth people on their way to a distant planet, where they’ll start a new life. It takes a few hundred Earth years to get there, so everyone must sleep on the way. But a pod malfunction has caused Jim to wake up 90 years too soon. The poor guy went into hypersleep thinking he’d eventually awaken to a lively, bustling social life on the ship, a space-age ocean liner equipped with rec areas, an automat-style breakfast area, and a glamorous futuristic-retro art deco bar that wouldn’t have looked out of place in the Chrysler Building circa 1935. Instead, Jim wakes up alone. It’s the bro-bummer of a lifetime.

So he wanders through the ship, trying to figure out how he might game the system and get back to sleep. Everything onboard is controlled by invisible, automated voices—there’s no real human in sight, and no real human voice within earshot. Jim tries to get answers to his many questions, but his pleas fall on deaf ears. It’s grimly funny very time he hears, “I didn’t understand that.” We’ve all been there.

There’s only one person for Jim to talk to, and he isn’t even a person. Arthur (a sleek, gleaming Michael Sheen) is a painstakingly well-groomed android who looks, talks and listens like a bartender but who’s really only programmed to do so. Jim spends hours at the bar, pouring out his loneliness. He gets drunk a lot and wears ugly shorts all the time. He grows a fat, rounded, deeply unflattering Yukon Cornelius beard. This is what straight guys do without the (allegedly) civilized influence of women, and the movie is in on the joke. But if Jim’s mopiness is played partly for laughs, his despair is genuine. Pratt is a good enough actor to convey both, and when Jim goes for a lonely space walk—the ship is outfitted with special Buzz Lightyear-style suits for doing so—he’s both visibly overwhelmed by the wonder of the star-dotted velvet around him and wrecked with despair because there’s no one to share it with.

And then suddenly, somehow, Jim is no longer alone. There’s a girl he likes, a smart, funny writer named Aurora (just like the princess in Walt Disney’s Sleeping Beauty), and she’s played by Jennifer Lawrence, who somehow looks more radiant than usual: Her face is a little fuller and softer—she’s like a baby Ellen Barkin. Aurora awakens early too, and Jim wins her heart, but only through an act of deception. At first, Aurora has trouble accepting that she’s doomed to live the rest of her life on a mostly deserted space ship. But she succumbs to the idea, and to Jim, too. The two go for a romantic space walk—at last, Jim has someone with whom to share the glory of space’s emptiness!—and try to kiss afterward. Their barrel-shaped suits keep them from getting too close, and they laugh. They’ve become an Adam and Eve for End Times.

The knowledge of Jim’s deceit tortures him, but he’s also happier than he has ever been. And if that’s not a great fainting couch on which to drape a science-fiction romance, what is? Passengers’ director is Morten Tyldum (The Imitation Game), working from a script by Jon Spaihts, and he vests much of the movie with a buzzing neon glow. (The space-walk scenes, contrasting glo-stick luminescence with inky blackness, are particularly beautiful.) But the movie runs aground in the last third: It’s as if Tyldum and Spaihts know they can’t get too wiggy, so they take a hard right and try to land their ship in more conventional territory.

Along the way they make what appears to be a failed attempt to channel the intense doomed romanticism of Brian De Palma’s Mission to Mars (specifically, the sorrowful and glorious scene in which astronaut Connie Nielsen fails to save her fellow astronaut husband, Tim Robbins). By that point, Tyldum has crashed his ship, figuratively speaking—inside this failed picture there’s a sicker, darker, more truthful one crying to get out. But for a while, Passengers is really going for something. The movie it might have been is lost in space, alone, never to be seen by mere mortals. All we can see from Earth are its few brightly burning scraps, but at least it’s something. 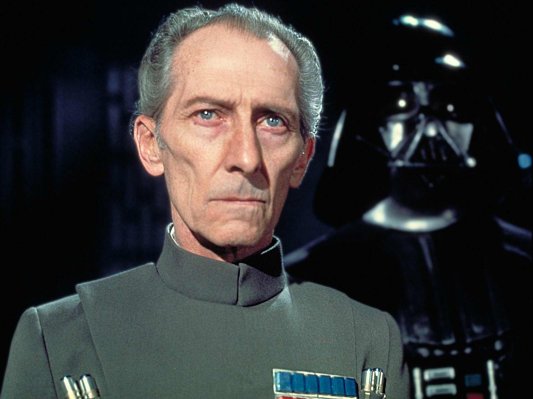 Let's Talk About Grand Moff Tarkin in Rogue One
Next Up: Editor's Pick