A protestor shouts as she is arrested outside the House gallery during a special session of the North Carolina General Assembly, Dec. 16, 2016 at the Legislative Building in Raleigh, N.C.
Ethan Hyman—Raleigh News & Observer/TNS/Getty Images
Ideas

Republicans in North Carolina have revealed their true colors, and they are not red, white and blue. In a brazen act of legislative overreach, they have brought forth and signed legislation to strip the newly elected Democratic governor, Roy Cooper, of a wide range of powers. Their work is to, in effect, nullify the election and turn their backs to democracy.

With Governor Pat McCrory’s signature, the governor-elect will lose his ability to control the state’s election boards and to appoint trustees of the University of North Carolina. His ability to make executive appointments will be restricted by slashing the number of appointments he will make from 1,500 to 300. The state Senate will have veto power over his Cabinet picks.

The Reverend Doctor William Barber II, president of both the North Carolina NAACP and the Repairers of the Breach, said to me in a text, “For Speaker [Tim] Moore and Senate Pro Temp [Phil] Berger to do this under the cover of having sessions supposedly called to help flood and wildfire victims is one of the worst forms of hypocrisy we have seen in this state since the days of Jim Crow, when politicians passed racist legislation while claiming to be upholding the American way.”

In effect, the Republican leadership aimed to secure unprecedented unilateral control over the state of North Carolina. Ben Jealous, the former President and CEO of the NAACP, said it was “all driven by corruption and cowardice.” No matter the motivation, what they’ve done is undemocratic. And this blatant power-grab was hatched in secret meetings of an all-white caucus. Their true color—revealed.

The Rev. Barber once told me, “If you want to know what a Donald Trump presidency will look like, all you have to do is look to North Carolina.” For over five years, the Rev. Barber and a marvelous coalition of forces across the state have organized to resist what they rightly describe as the extremism of the state’s Republican Party.

North Carolinians across the state organized to resist this extremism. And the Forward Together moral movement, led by the Rev. Barber, was successful in helping to defeat Governor McCrory and, in some ways, to shift the center of moral gravity in the state—only to confront a special session of extremists who could give less than a damn about their efforts or the results of the state election.

The Rev. Barber described the legislative session as “The Herod Special Session in North Carolina,” a Biblical reference to the Roman client king of Judea who desperately wanted to hold on to power at the time of the birth of Jesus.

He said, “After fighting the election results for a month, the North Carolina GOP has called a special session of the Legislature to subvert the Governor-elect’s powers just before Christmas… This group of grand extremists are trying to change the makeup of boards of election, make partisan the states courts and deny access to the Supreme Court of North Carolina by changing appellate procedures. And these are just three of more than 20 bills. They want power for power’s sake….”

What is happening in North Carolina is unconscionable. A quick glance at Donald Trump’s cabinet nominations suggests that he will follow a similar path. From the Justice Department to the Departments of Education, the Interior and Health and Human Services as well as the EPA, we have to brace ourselves for four years of extremism. And I suspect that if Trump doesn’t get his way, he will try, as the Republicans in North Carolina are doing, to flout democratic norms—to throw democracy into the trash bin.

The conservative extremists among us take advantage of our commitment to democracy in their efforts to undermine it. We express faith in democratic processes and institutions while they seek power by any means necessary. Their darker ambitions dim our brighter lights. And when we resist, they either condemn or dismiss or shout that we are betraying the country.

But the good folks in North Carolina—as they have battled in the streets, at the ballot box and in the courtroom—exposed the extremists for who and what they are. “This is what Herods do when their power is threatened by love and justice,” the Rev. Barber declared.

We must do the same with Donald Trump, by ignoring the empty appeals “to give him a chance” and fighting with everything we have. Or the extremists will win, and we will be locked up in our terrors. 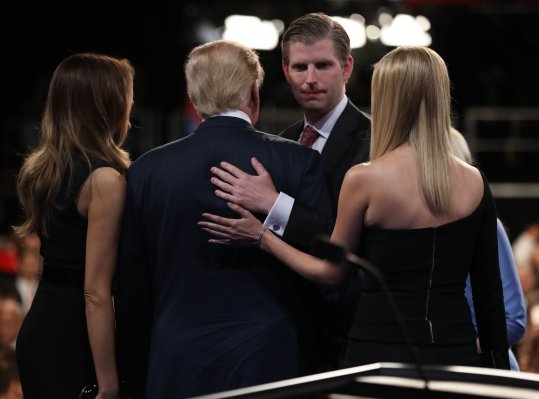 Donald Trump's Children Wouldn't Be the First Presidential Kids to Work in the White House
Next Up: Editor's Pick